There is a persistent mystery that you left us. It concerns a burn mark on the bathroom counter. To this day, none of us knows (or admits to knowing) where it came from. But I have a theory. Back in July 2009, I wrote you about it. Let us review: 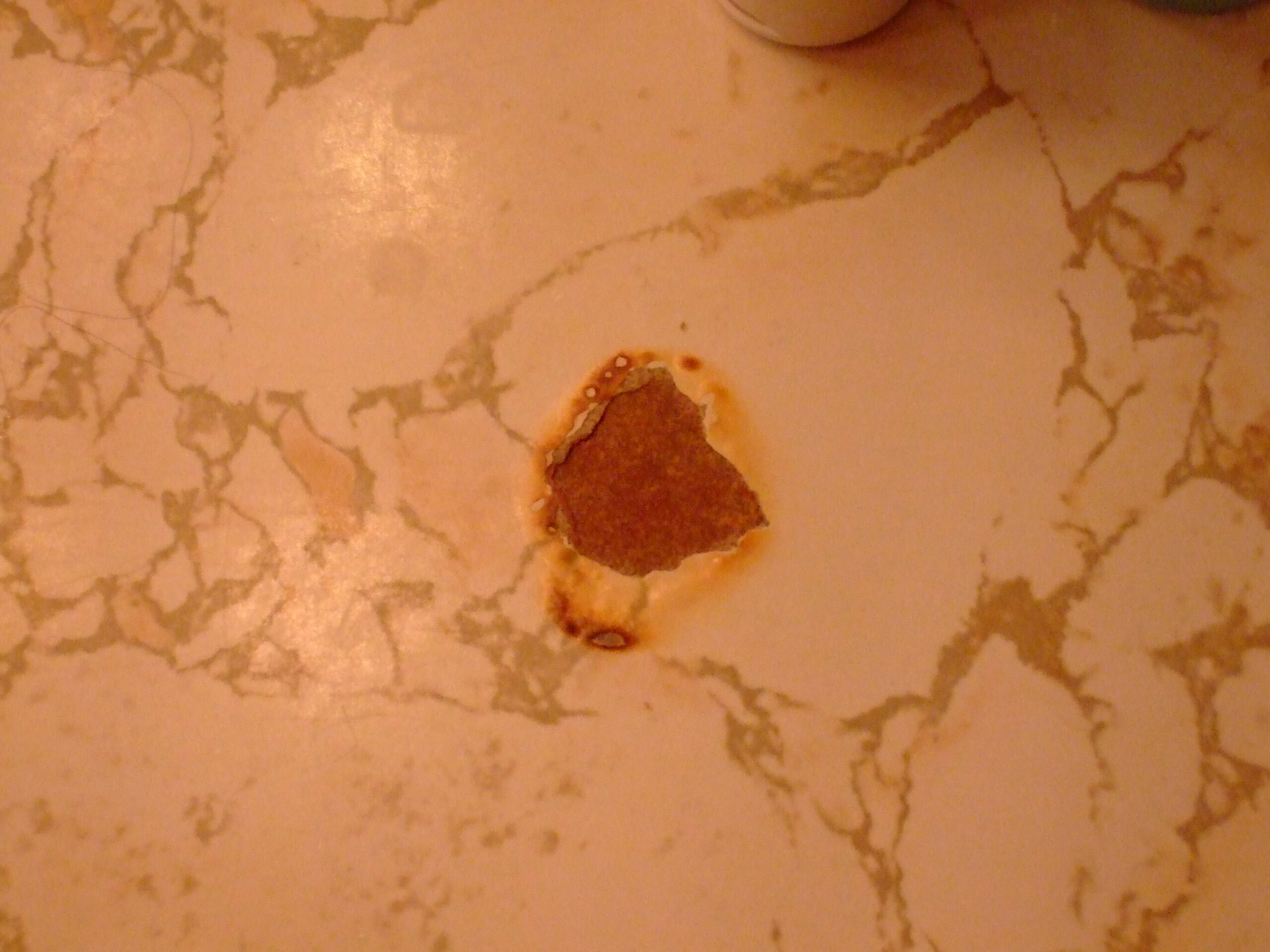 On the first floor of our house is the bathroom you shared for fourteen years with Aiden. In that bathroom there is a Formica countertop. The countertop had been there for probably a decade or more before we moved into the house in 1995, and had always been pretty much in pristine condition. Formica is fairly impervious to abuse, so the sudden appearance one evening of a prominently positioned two-inch charred hole in the countertop caught my attention. I had my suspicions as to who caused the burn mark, but felt it important to perform my fatherly due-diligence and questioned Aiden, who was maybe four or five years old at the time and, thus, not a very likely culprit. Moving on to my older son, I tried to use gentle but firm persuasion to draw the truth out of your (I was hoping) guilt-ridden soul. Wasn’t gonna happen, though. In fact, in all the years since the burn mark appeared, I never managed to get you to admit anything about it. And the fact that, in succeeding years, you amassed a collection of matchbooks, eleven Bic and/or Zippo lighters, a container of lighter fluid (!), eight boxes of sparklers, and even more boxes of incense … well, let’s just say I held out hope to one day get a confession. This past Hanukkah (Judaism’s fire holiday, always a good time to discuss arson with your child), I actually came close to connecting you to the crime when I mentioned the burn yet again and suggested that enough time had gone by, that the statute of limitations on punishment had run out, so wouldn’t you please just tell me what happened in there. You paused what you were doing, looked over at me, peering deeply into my eyes, smiled that amazing smile of yours, and then walked away. You walked away! I never did get the story of how that burn mark got there. It will remain a mystery forever.

This makes me think, JoJo, of how we – your family – have chosen to live our lives in your absence. I often tell people, “Rather than always be mourning that he’s gone, we celebrate that he was here.” And while that doesn’t mean the tears have stopped falling, it does mean that we try to focus on what we loved so deeply about you. Included in that list is your perpetual hope that things would be okay (like not getting caught for burning a hole in the countertop), that problems can be worked out, that people can make it through hard times, and that love and an exuberant, powerful bearhug never hurts (much).

So I’ve written you a song. Okay, I didn’t write it for you per se, but I’ve dedicated it to you. And for a specific reason: hope. You were so good at conveying hope to others: at comforting them when their chips were down, at showing them there was always a reason not only to look forward to what was up ahead but to be grateful for that very moment because there’s always something good in the air even when you might not be thinking so. Because of all of that, this piece just reminds me of you.

The song is called “Hope Smiles (Neilah Conclusion).” The title references its placement as the last prayer of the long day of atonement we call Yom Kippur. The ancient imagery of the Neilah Service is about asking God to forgive us for all the times we’ve messed up during the past year. With sunset and the end of Yom Kippur fast approaching, we stand with great urgency before the open Ark promising to do better in the year ahead, if only God will grant us a boon: the blessing of an inscription in the Book of Life. 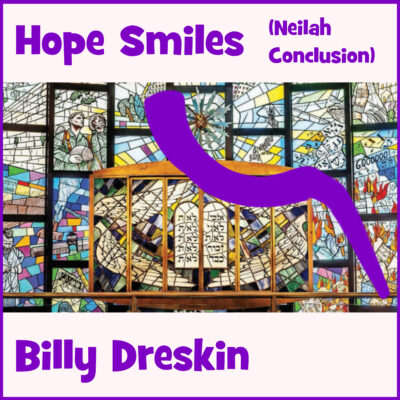 The title was inspired by the writing of Alfred Lord Tennyson, who offered that “Hope smiles from the threshold of the year to come, whispering, ‘It will be happier.’” Tennyson’s words expressed what I had wanted to convey in this piece because this is what I feel at the end of Yom Kippur: not that we leave the worship space filled with fear and dread not knowing if we’ve been inscribed into the Book of Life but with confidence that the year ahead will be a good one, that each of us can do better at living our best selves, and that we therefore have every reason to write ourselves into the Book of Life.

Give a listen, JoJo. It’s only 90 seconds long. You’ll hear three of me singing, plus a few instruments. Focus on the clarinet. In the opening bars you’ll hear echoes of Kol Nidre, the ancient melody which started the Day of Atonement only twenty-four hours earlier. These opening notes remind me (and hopefully others) that we gathered here (wherever our Yom Kippur services happen to take place) to sincerely prepare for a better year ahead.

The opening Kol Nidre notes then give way to ancient Hebrew words that acknowledge God as God, and reaffirm a very real desire to do better with our lives, to make a difference, and to make life mean something substantially meaningful and good.

The clarinet follows along for the minute-and-a-half of this musical ride, joining the three vocal parts in some pretty harmonies. But then, in the final bars of the song, the clarinet offers its own final thought. With a jubilant flourish that some listeners will likely frown upon because it breaks the somberness that often defines this moment, “Hope Smiles” ends on a celebratory note (okay, 20 notes). Instead of sending us home anxious about God’s decree, the clarinet certifies that our promise to do better is not only a sincere one but one that gives us every reason to smile at our neighbor and to head home with unbridled confidence that we will make a difference, that we will, in whatever ways we can, make the world better for everyone. If there are inscriptions into the Book of Life, we’ll be doing the writing!

And that, Jonah, is why I dedicated “Hope Smiles” to you. This is how you lived your life: doing what you could by lending a hand, giving comfort, and simply sharing that beautiful smile of yours. All this to make the world in which you lived a little better for your having been here.

And what if it isn’t true? What if you had your sour moments too? What if you weren’t always there to lend a shoulder? Well, to that I say …

In the years since you left us, so many acts of kindness have been offered because of you — in memory of you, and inspired by you — that your impact in the universe has been exponentially increased. So maybe you weren’t a perfect angel, but you were good enough for us to want to remember you in these ways.

There’s an old hasidic story I love that goes like this: The Hafetz Hayyim (Lithuania 1839-1933), who was renowned for his saintly character, had a student who was falsely arrested. The prosecution, hearing that the Hafetz Hayyim would testify on his student’s behalf, said to his colleagues, “Do you know what they say about him? That he came home one day and, finding a thief ransacking his house, ran after him, even while he could plainly see the thief was clutching the rabbi’s possessions, and shouted, ‘I declare all of my property ownerless,’ just so the thief would not be found guilty of stealing anything.” When asked if the attorney actually believed that was true, he replied, “I’m not sure. But they don’t tell stories like that about you or me.”

In life, Jonah, you offered people hope. In death, you continue to inspire us, reminding us that each of us can be a force for good in the world.

And if that isn’t a hopeful conclusion to your own song, I don’t know what is. Thanks for everything, boy. I’m so glad that, for a while, you were here. You are one of the lights that help me steer my ship.