One of your friends, in remembering the impact you’d had on her life, excerpted a Walt Whitman poem:

Still though the one I sing, (One, yet of contradictions made,) I dedicate to Nationality, I leave in him revolt, (O latent right of insurrection! O quenchless, indispensable fire!)

I especially love the part about fire. You see, Jonah, you had this “quenchless” flame inside of you. We noticed it very early on when, in the first grade, you bit Dan Roth. It seems Dan did something, right or wrong, that you felt demanded retribution. The reader may be interested to know that, despite this momentary beastliness, you remained a friend of Dan’s throughout high school. We may also be interested to know that you did not remain a biter. You did, however, retain your sense of righteous indignation – your “fire,” if you will. On more than a few occasions, we heard from parents who were not pleased that your anger had been directed at their child. We apologized. But the flame burned brightly, and we aimed to tend it and guide you as best we could.

We loved that fire. Because, as you grew, it began to get lit by things that mattered. Toward the end of high school, you became involved in a group that protested not the beliefs but the behavior of members of the Church of Scientology. You would meet fellow protestors in New York City, spend some quality time annoying the scientologists, and then get something to eat. I wasn’t sure how valuable these efforts were, but I quietly admired my Maccabee as you began to activate the warrior-spirit that resided inside your mostly dove-like persona.

Then, this past January, in the days leading up to elections, you knocked on doors in Buffalo to get out the vote. I was so proud to learn you were doing that, to discover that you were beginning to kindle that flame of yours for truly righteous reasons. 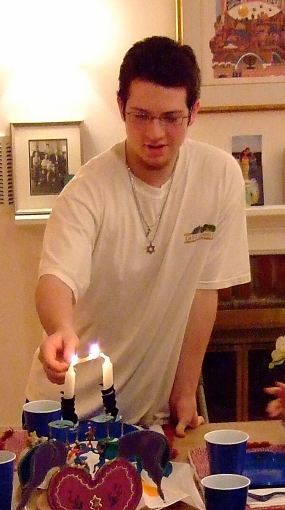 Who thinks he liked being Jewish because he could light things on fire? December 2006

Ironically, fire played another role in your life. It seems you had a rather zealous interest in making fire; you apparently had a thing for flames. Every Friday night, as our family welcomed Shabbat, you were the one to light the candles. Always Jonah. And when Hanukkah would arrive, we enjoyed setting out some 5-7 hanukkiyot, creating quite a “festival of lights” in the front window of our home. As the nights of Hanukkah advanced, it became quite a job to ready all those candles. Now who do you suppose was always volunteering to set them up?

Each year, during Hanukkah (or sometime after … once we didn’t get around to doing this until the following summer!), we take a family photograph by Hanukkah candlelight. I would have to cajole Mom and you kids to get closer to the flames so your faces would be properly illuminated for the portrait. But your face, Jonah, was always right there. I never had to give you instructions (except to stop playing with the burning candles). We now have a 21-year series of candle-lit Hanukkah family photographs mounted on our refrigerator, begun shortly after Katie, now 21, was born.

Hanukkah also meant gifts. And yours were always handmade. More often than not, they included fire. Once, you made me a cardboard synagogue, with a tiny me inside on a tiny bimah. On top, you mounted two candles. Maybe they were Shabbat candles, I’m not sure. You just liked getting some fire in there. This past Hanukkah, you made me a box that had a single candle mounted inside with a hole on top to keep from burning down the box (and probably the house). All over the top and sides you had punched tiny holes so that, in a darkened room, the candle-illuminated box looked like a night sky full of stars. “Any excuse to burn things” was, I think, one of your mottos. I cherish these kooky gifts of yours. 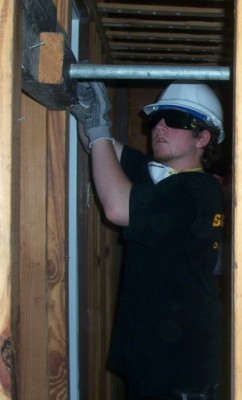 In February 2007, you and I joined our temple’s mission to Mississippi, to help rebuild homes in the aftermath of Hurricane Katrina. Once more, your flame of righteousness burned brightly and there was no question that you would be there, even though you had to arrive late following the NFTY Convention in Washington. But once you got there, you worked hard, lending a hand to anyone who asked for it. You pulled nails out of water-ravaged boards, so that they could be used again in the rebuilding. You pulled down ruined parts of houses to make way for new construction. But I think your favorite part must have been helping to build a 12-foot bonfire for our team of three churches and a temple to enjoy an evening of relaxation and fun. I had to return home early from the trip, so I missed this little spectacle, but that bonfire had to have been the biggest fire you’d ever helped create. So I imagine you were feeling pretty good that evening. 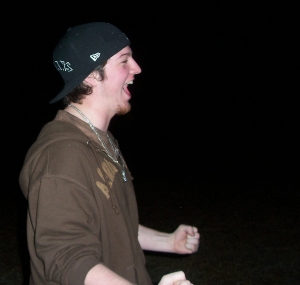 It is with the following story, however, that you attained legendary status in my life. On the first floor of our house is the bathroom you shared for fourteen years with Aiden. In that bathroom there is a Formica countertop. The countertop had been there for probably a decade or more before we moved into the house in 1995, and had always been pretty much in pristine condition. Formica is fairly impervious to abuse, so the sudden appearance one evening of a prominently positioned two-inch charred hole in the countertop caught my attention. I had my suspicions as to who caused the burn mark, but felt it important to perform my fatherly due-diligence and questioned Aiden, who was maybe four or five years old at the time and, thus, not a very likely culprit. Moving on to my older son, I tried to use gentle but firm persuasion to draw the truth out of your (I was hoping) guilt-ridden soul. Wasn’t gonna happen, though. In fact, in all the years since the burn mark appeared, I never managed to get you to admit anything about it. And the fact that, in succeeding years, you amassed a collection of matchbooks, 11 Bic and/or Zippo lighters, a container of lighter fluid (!), eight boxes of sparklers, and even more boxes of incense … well, let’s just say I held out hope to one day get a confession. This past Hanukkah (Judaism’s fire holiday, always a good time to discuss arson with your child), I actually came close to connecting you to the crime when I mentioned the burn yet again and suggested that enough time had gone by, that the statute of limitations on punishment had run out, so wouldn’t you please just tell me what happened in there. You paused what you were doing, looked over at me, peering deeply into my eyes, smiled that amazing smile of yours, and then walked away. You walked away! I never did get the story of how that burn mark got there. It will remain a mystery forever.

One night during shiva, Rabbi Josh Davidson, our family’s longtime and very close friend, read a poem that I have long loved. It describes a person none of us frequently sees. That Josh selected it to remember you took my breath away. Here are a few of its verses (written by Stephen Spender):

The names of those who in their lives fought for life, who wore at their hearts the fire’s center. Born of the sun they traveled a short while towards the sun, and left the vivid air signed with their honor.

I believe Josh was correct. Jonah, you did indeed wear at your heart the fire’s center. For a brief time you, a child of the sun, traveled towards that great, flaming orb. And when your too brief but intensely blazing and spirited life came to an end, Jonah Maccabee Dreskin had indeed left this world of ours signed with your honor.