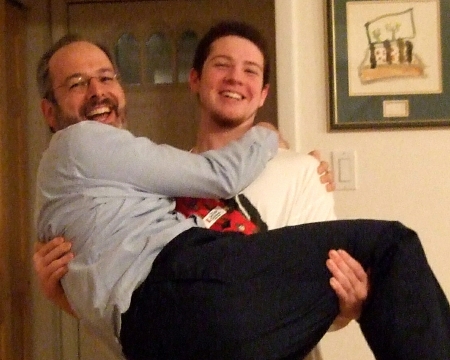 My 19-year old son, Jonah Maccabee, died on March 5, 2009. As you can imagine (or worse, know firsthand), grieving for a child is a horrendous place to have to put your heart. They say that time will heal, to which I can only respond, “I hope so” … but I seriously doubt it.

I don’t think I can ever “move on,” but I’m fully committed to making sure I “carry on.”

The reason for this blog is not to track my grief (although I suspect that will happen). Rather, I intend to share – with anyone who would like to spend some time with Jonah – the stories and ideas that were part of his life. His was a fascinating one, and his journey was extensive. It breaks my heart that Jonah’s life has come to an end. But while he lived, he did so fully and honorably. The words found here will record and celebrate that fullness. Jonah’s time among us was far too brief. But the impact he left behind is enormous.

The title of this blog, “A Thread That Has No End,” is taken from a Led Zeppelin tune, “All My Love,” which Jonah had listened to in his dorm room just a few hours before he died. Ironically, Robert Plant composed “All My Love” in memory of his own son who’d died (at age 5) of a respiratory infection.

Should I fall out of love, my fire in the light
To chase a feather in the wind
Within the glow that weaves a cloak of delight
There moves a thread that has no end.

I am now feeling myself connected by “a thread that has no end” to a dad who lost his beloved son, and (through that dad’s music) to a son who shared more threads with me than I ever truly knew. For the remainder of my own years, it will be my great honor to safeguard those threads.

You’re welcome to join me along the way.