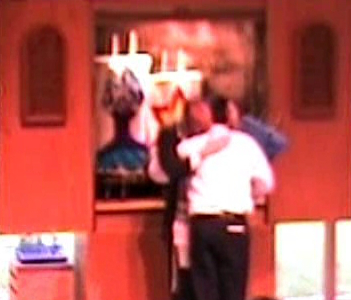 Don’t take this personally, but I don’t cry that much for you anymore. I mean, it’s been nearly thirteen years! It’s certainly not that I don’t miss you. I do. But life goes on. It has to go on. So my grief, which very much continues to this day, resides in a much quieter place than it once did.

But today I cried.

It was a story that did it. I was watching Stargate SG-1, the 1997 sci-fi series in which a U.S. Air Force special ops team visits and explores planets in other galaxies. I know it sounds silly, but bear with me.

The SG-1  team has a run-in with little blue crystals that turn out to be sentient. When Colonel Jack O’Neill reaches out to touch one, the crystal apparently feels threatened and slams the guy with a power blast. Later realizing that Jack probably hadn’t intended any harm, the crystal assumes Jack’s human form and returns to earth with the crew. The crystal wants to heal Jack of the pain it sensed in him, but back on earth discovers it was the death of Jack’s seven-year-old son that constitutes the real pain Jack carries.

Blue Crystal Jack later meets up with Real Jack, explaining that death is different where the crystal comes from, and that Jack just needs to spend time with his son to ease his pain. Jack tells him that’s impossible, that his son is gone forever.

JoJo, let me interrupt a moment to say that, as I recount this story to your mom, I am again consumed with crying, gasping for breath as tears cascade down my face.

Blue Crystal Jack tells Real Jack that Charlie isn’t gone, that he lives on inside Jack’s heart. Blue Crystal Jack then reaches out, ET style, and touches O’Neill’s chest, to emphasize where his son Charlie can be found. As the crystal does so, its hand transforms from Jack’s hand into Charlie’s hand, and the rest of Charlie soon follows.

The final interaction between the blue crystal and Jack is that of Jack holding his son’s years-gone seven-year-old hand and the two of them walking together before Jack gets his goodbye. The blue crystal then returns to its galaxy and Charlie returns to Jack’s heart.

I catch my breath.

From the very first days that you were gone, Jonah, I had to learn to live with what so many have described as “the waves of grief.” Never knowing when one will roll over me, I had to do my best to ride them out. Thirteen years ago, there was nothing harder for me than to meet those waves. I’ll never forget the deep, gasping, heaving crying that went on back then. But in time not only did I come to accept those waves, I understood them as a sign of my profound, ongoing love for you, a love I hoped would never disappear. And whenever a new wave would arrive, that was confirmed.

Which is why, as I’m watching something as trivial as a dumb TV show, I open wide to welcome the always-surprising return of the wave. It’s the closest I think I can get to seeing you again.

You and I never got our goodbye, Jonah. You died in Buffalo while we were home in Ardsley. The last time I was with you was on January 9, 2009, as you left to return for your second semester of freshman year at the University at Buffalo. The next time I would be with you was on March 5, 2009, about ten hours after you had died. You were lying in a hospital bed in a very cold room, with a lot of tubes still connected to you.

This is how I spent my last moments with you. Nothing at all like a hand-in-hand walk across the tarmac. Or, as I remember from dropping you off at UB the previous August, one of those great, big, powerful bearhugs that squeeze the breath out of you but always sent me home with the lingering sensation that I still had you with me.

So the idea of getting to see you one more time, all these years later, well, you can imagine how appealing that might be.

After you died, Jo, lots of people reported seeing you in their dreams. “Come visit me again” was a common refrain on Facebook as your friends adjusted to your being gone. I too had a few of those dreams. Some mighty strange ones that I hoped against hope contained some truth in them, that I had in fact seen you, and that I might get to see you again. But while those were very powerful moments, I slept through each and every one of them! 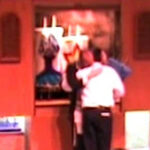 Poor image from a surveillance video, but even in front of the Ark, in front of the congregation, at Jonah’s Confirmation in 2000, everything stops for a hug from this boy.

So you can imagine the emotional tug of that episode of Stargate SG-1. My heart instantaneously switched over to grief mode. And it hurt, that’s how badly I wished this television “dream” also contained some truth and could happen for you and me.

It can’t, of course. Outside of my dreams, seeing you can’t ever happen again. But oh, to be able to spend ten more minutes with you!

Sitting with my memories of you, Jonah, is something that can, and does, happen each day. If it weren’t for those memories, you’d be truly gone. It’s the memories – precious memories, sacred memories – that keep you close to me, that keep your hand in mine.

In life, we all have to let go of lots of the people we love. I think of Grandma Ida and how often I wish I could pick up the phone and call her. Even though I can’t, my memories of her are so strong, and so clear, that I can almost have our conversation without her. And because of that, I still miss her but I’m not really without her.

And I’m not really without you, my son. You live inside my heart. You bring me joy. You teach me wisdom. And yes, you break my heart.

But I live. And I live well. Happy. Still missing my boy. Never moving on. But grateful to be able to carry on.