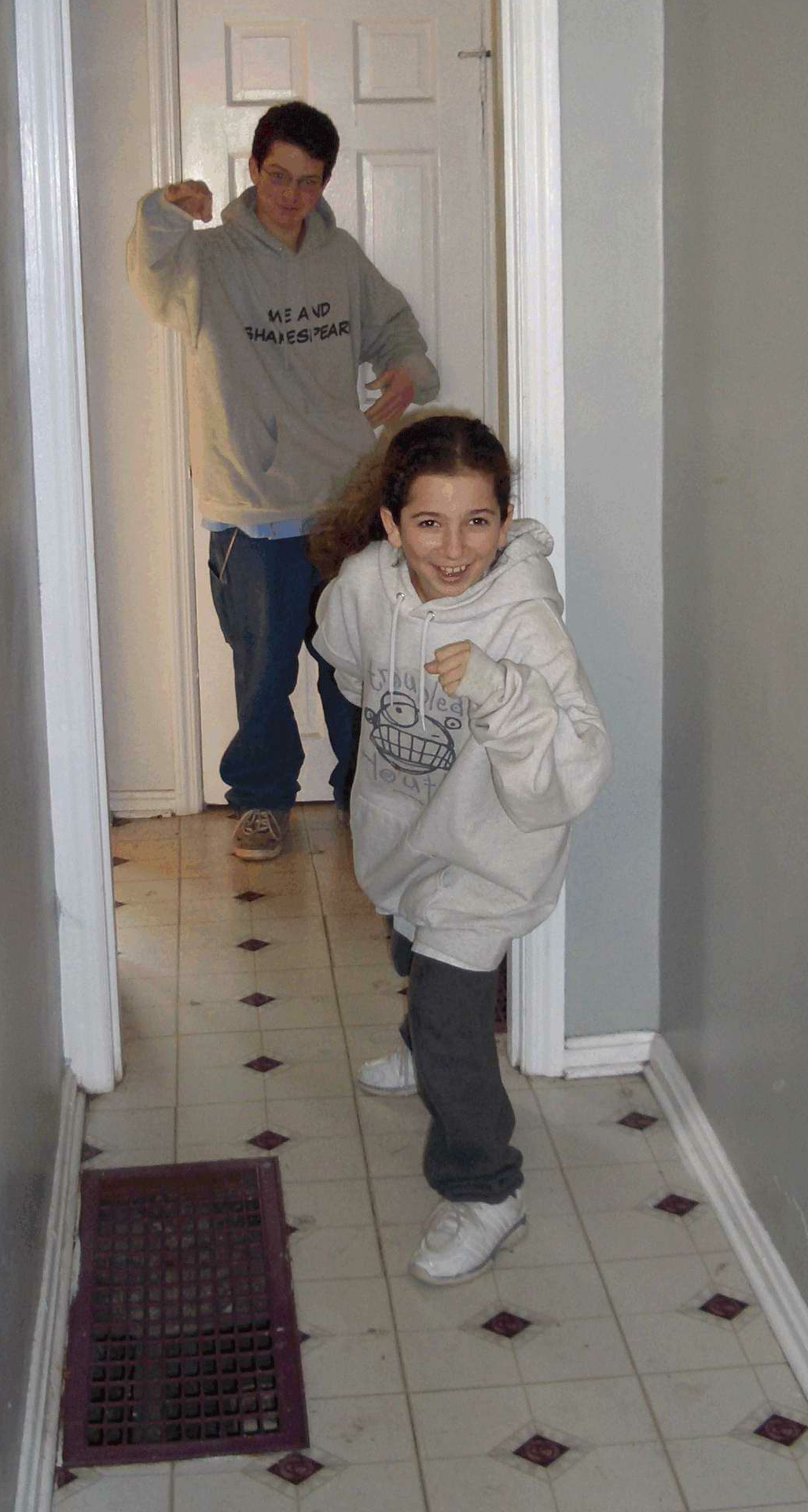 I have a love-hate relationship with doors, in particular the one that stands at the front entrance to our home. Not the entry door, the heavy one that “defends the castle,” but the second layer, the screen (or storm) door that permits light and air (but not bugs).

When you were sixteen years old, I took you, Katie and Aiden back to 1221 Avon Drive (in my hometown of Cincinnati) where I lived the first sixteen years of my life. You and Aiden reenacted that fateful day when Uncle Jimmy, noodle in hand (from the bowl of chicken noodle soup he’d previously been slurping), chased six-year-old me through the hallway that led from our kitchen to the front door.

Upon reaching the storm door, I missed the handle and with the force of a six-year-old body hurtling through a front hallway in a desperate attempt to escape his noodle-weaponized brother, I hit the glass instead. This was prior to the invention of tempered glass so when the storm window broke, it did so into dangerously sharp pieces that landed me in the hospital to stitch up my right arm.

Needless to say, I try not to run toward glass doors anymore, tempered or not.

As you were growing up, our home had a storm door too. Every spring, you would willingly descend into the basement and exchange the glass for a screen. I was always impressed that you did this without complaint. In fact, whenever you were asked to help around the house, you just did it. You were a scary monster, Jonah.

After you died, the seasons soldiered on. How the universe managed to do this in the face of your absence, I still ponder. Each time winter turned to spring or summer to fall, mom sent me down to the basement to exchange the front door inserts, and I thought of you. And I missed you. Yes, because I’m lazy and would have preferred that you take care of this. But for some other reason as well — can’t quite put my finger on it. Oh yes, did I say I miss you?

Then this spring, Aiden happened to be home on a day that just screamed for there to be a screen in the front door. Mom asked him to take care of it and he did. Just like that. No questions asked. As I watched, admiring what a fine young man he’s become, my mind went to you, and to how wonderful it always felt watching you change that insert every fall and spring, even while I appreciated how kind your little brother is and that he too took care of this without missing a beat.

I thought, “I’ve got two wonderful boys. One in my heart and one in my house.” And all is right with the world. Well, pretty right anyway. I still wish you were around. 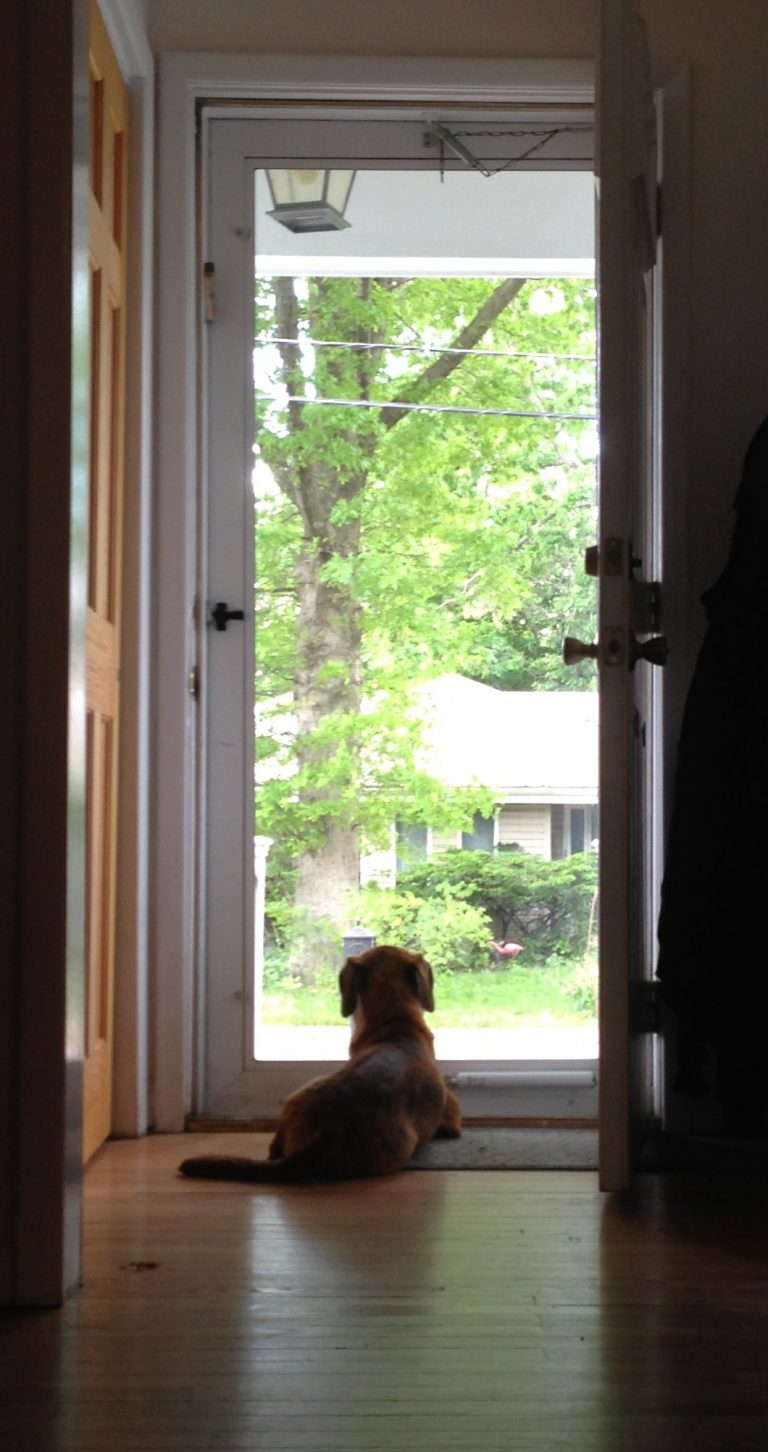 Don’t be fooled by this moment of calm.

The story could end here if not for Charlie. You never met Charlie. He’s the mutt we rescued about a year after you left, trying to fill in some of the space that had stayed empty without you.

Charlie’s a great dog. He brings an abundance of love and playfulness into the house. But in stark contrast to you, he doesn’t like the UPS guy. Or the FedEx guy. Or the mail guy. Or the mail lady. And when one of them approaches his perimeter, he bolts into action, explosively rushing to the front door, barking wildly, hoping against hope that the door will give way and he’ll be able to chew on someone.

Well, guess what? The other day, Charlie’s dream nearly came true. The storm door gave way to his frenzied onslaught, opening wide to let him out, much to the surprise and chagrin of the mail guy. Fortunately, he was delivering by truck that day and managed to reach the safety of his cab before Charlie made contact. By the time I got out there, the crisis had been averted but only because this particular mail guy is a dog guy too and accepts Charlie’s dream of eating him.

That was it, though. The storm door had to go. Quickly, because I don’t like the idea that Charlie can’t at least watch the world even if I won’t let him maul it. Paulo, who can fix anything, showed up with a new door and two promises: first, Charlie would never get through the door again; and second, we’d never have to change the insert again. This was great, because while I didn’t like putting in the screen and making the door even more vulnerable to Charlie’s sudden rush, Ellen loves screens because there’s nothing nicer to her than letting fresh air into the house. With one fell swoop, Paulo had taken care of all three of us, providing a door with a retractable screen that magically appears in the top half only so that Ellen gets her fresh air and Charlie still gets his kicks.

My only remaining problem is that I’m not happy when memories of you are taken away from me. I really liked changing the screen with the seasons. Whether it was me or Aiden, it always brought you back into the house. I don’t easily let go of that.

But that’s been the challenge all along. How to preserve my memories of you without freezing time or freezing life. Little by little, I let go of you. Because I have to. It’s the way to carry on.

Who notices a door, anyway? We pass through without a moment’s notice but, like life, some moments don’t just slip by. We stop and, for some reason, we notice “the door” (in case I was too obtuse, I’m writing in metaphors now). We see something that’s there, or something that isn’t, but it’s now claiming our attention. These surprisingly attention-catching points in time can add new definition to whatever we happen to be doing, wherever we happen to be headed as we step through.

I miss you everyday, Jonah. There is no doubt you continue adding definition to my footsteps. And while I don’t think I’ll ever be able to stop wishing you were here, I’m hoping I can at least make sure all that yearning is turned to good purpose. That’s what your foundation’s for.

Doors are there for us to step through as we move from one moment to the next. At some of these doors, I’m forever pleased that when I least expect it, I get to bump into you.

If you haven’t yet donated to The Jonah Maccabee Foundation’s Summer Campaign ’17, I hope you’ll do so. 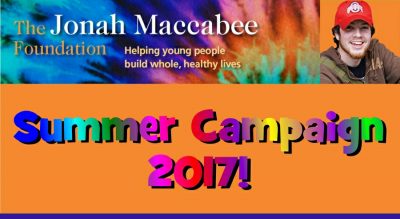