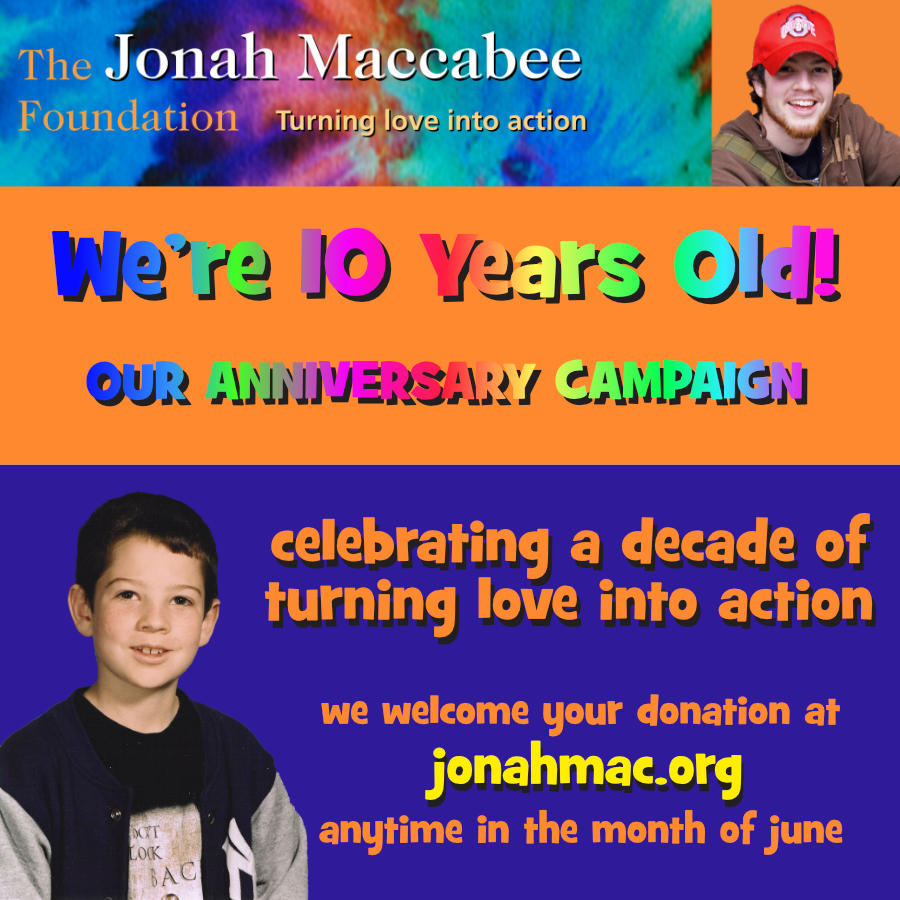 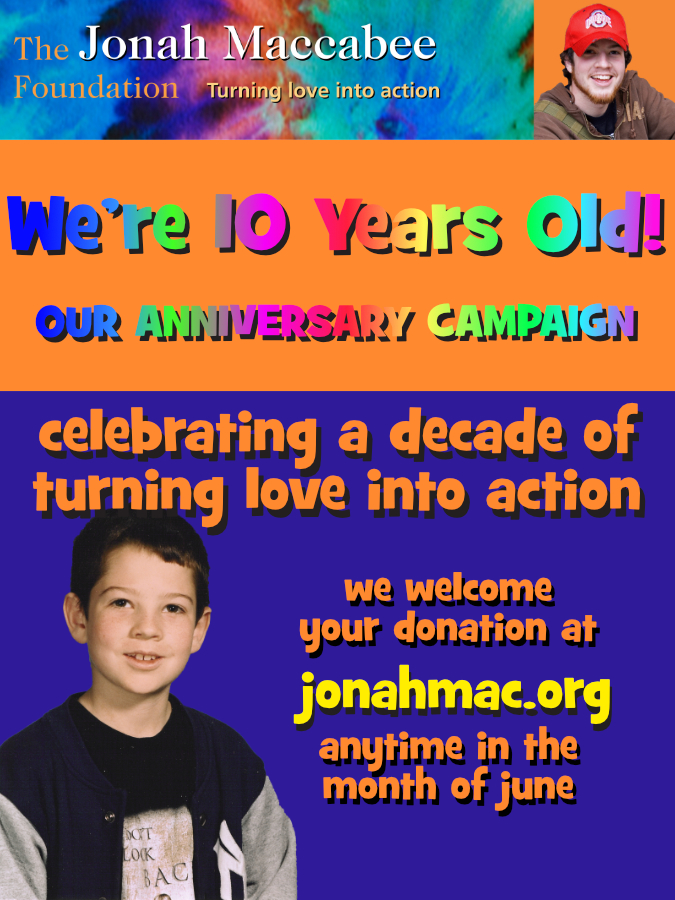 If you’ve not yet donated to our anniversary campaign, we’d be honored to have you do so here. Ten years of remembering Jonah by helping others — that’s a moment worth marking by helping us make our second decade a success as well. Thank you!

Geri Pell has been a Dreskin friend for nearly 30 years. Her son grew up with Jonah. And she has looked out for all of us from then right up to today. Geri writes:

I remember a lot of things about Jonah Maccabee Dreskin. I remember what good friends he was with my son Ben, the things they did together, the sleepovers, and the play dates when Aiden came along. But I think what I remember most was his love of music. One day, when Jonah was about 11, we were in the car together and he looked at me and said, “You know, Geri, I have a really good voice. Do you want me to sing you a song?” And so he did, and he was indeed very, very good. This leads to so many memories of Jonah performing in shows and going to see him both in community shows and at Play Group Theatre.

When Jonah was around 17 years old, many of us went to the URJ Biennial that year in San Diego. One evening there was a late night show at about 11 pm, and Josh Nelson was performing. I had never heard the amazing Josh Nelson before, but I was completely blown away by his evocative music and how it made me feel.

But more than how it made me feel, there was a group of kids at the very front near the stage, jumping up and down and hugging and loving the Jewish music. I watched as it surged to Jonah‘s blood. I marveled at how much he enjoyed his friends from camp and the Jewish music they had all came to love. I thought of what a wonderful legacy it was that Billy and Ellen had brought to him, along with the URJ and Eisner Camp.

Full circle, this is what the Jonah Maccabee Foundation means to me. It’s about carrying on Jonah’s legacy and how much Jewish camping and Jewish music meant to him. It was a way to light up Jonah‘s heart and face. I loved watching that glow. And I love watching it in every new person we bring to Jewish music and every person who’s heard it before and gets to hear it again and again.

Through its Arts Fund and Jewish Life Fund, the Jonah Maccabee Foundation has been so important to me these past ten years. I love that we have helped so many access the big ball of Judaism. There is a big spirituality in that, and it’s beautiful. I love watching the faces of people who have never heard the music before or participated in Jewish Life and are suddenly touched and infused with a new point of light in their Jewish souls.

And for this and more, his memory is a righteous one.

Jerry Wishner, along with his wife Barbara and three daughters, were part of the Dreskin’s synagogue going on twenty years. Jerry writes:

I didn’t know Jonah very well. This wasn’t unusual as I was much older, and our paths didn’t cross very often.

My three daughters did know Jonah. This seems unusual since he was between five and eight years older than them and you wouldn’t think their paths would have crossed much either. Despite the age difference, however, they remember him well from their days at Woodlands, particularly religious school. As one of my daughters explained, “Jonah was a force with limitless energy and enthusiasm. He lifted the entire room”

Still, while it may not be unusual that I didn’t know Jonah, it is my loss.

Making the world a better place isn’t always easy. If you are looking for ways to do it, hitch your cart to Rabbi Billy and the Dreskin family. Their commitment to healing the world was evident the very first time we met. Social justice, Jewish life, art and music, they have it covered. I can’t think of a better guide on this journey.

It has been a privilege to be able to support the Jonah Maccabee Foundation over the years, making the world a better place in ways that are an extension of who Jonah was and keeping his spirit alive. Supporting the foundation gives me a second chance to be in the room he lifted and helps me get to know Jonah a little bit better.

We’re so grateful for wonderfully kind donors like Geri and Jerry (homonyms!). We hope you’ll be inspired by them to donate to our June campaign. 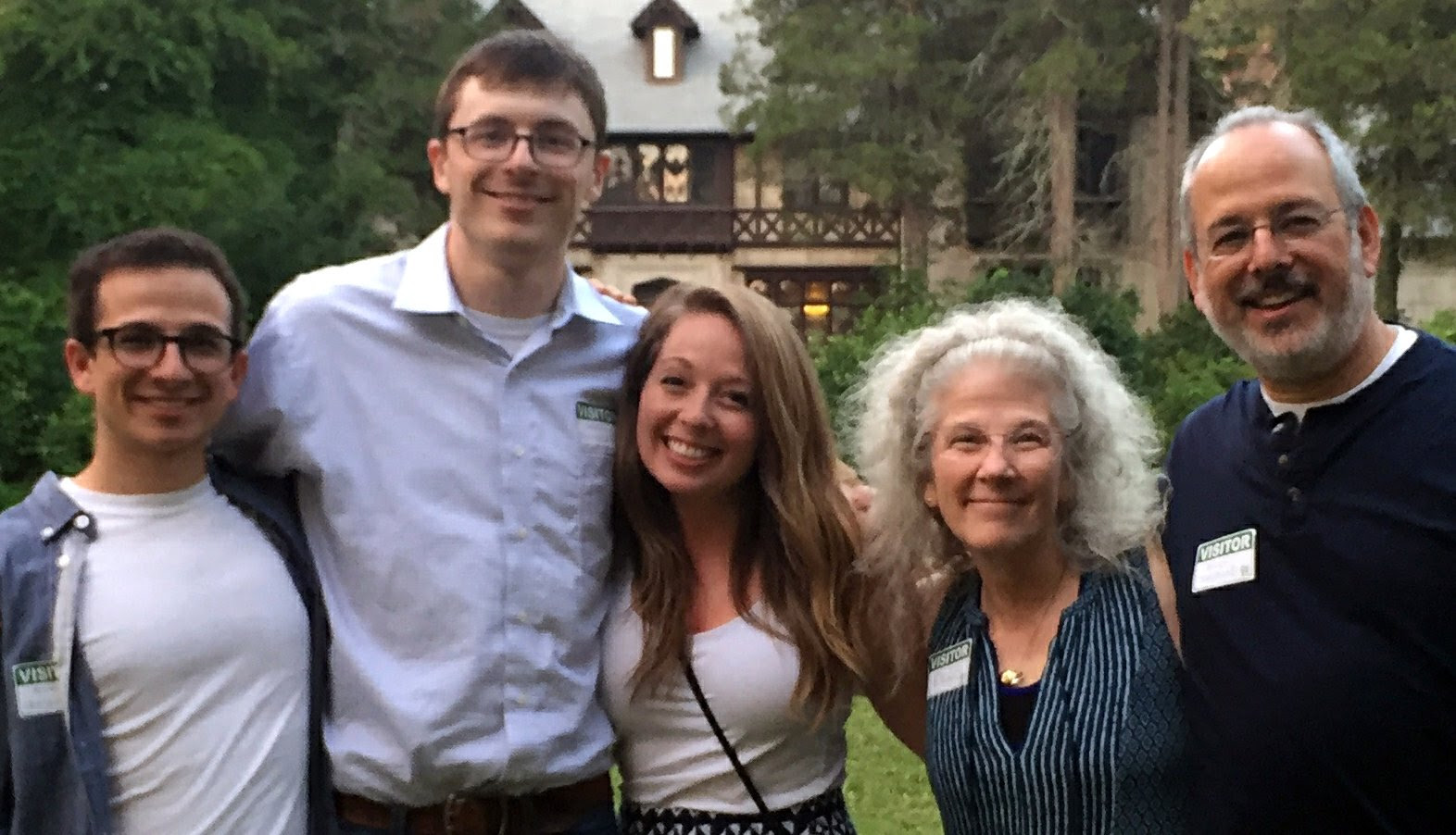 Thank you for caring.