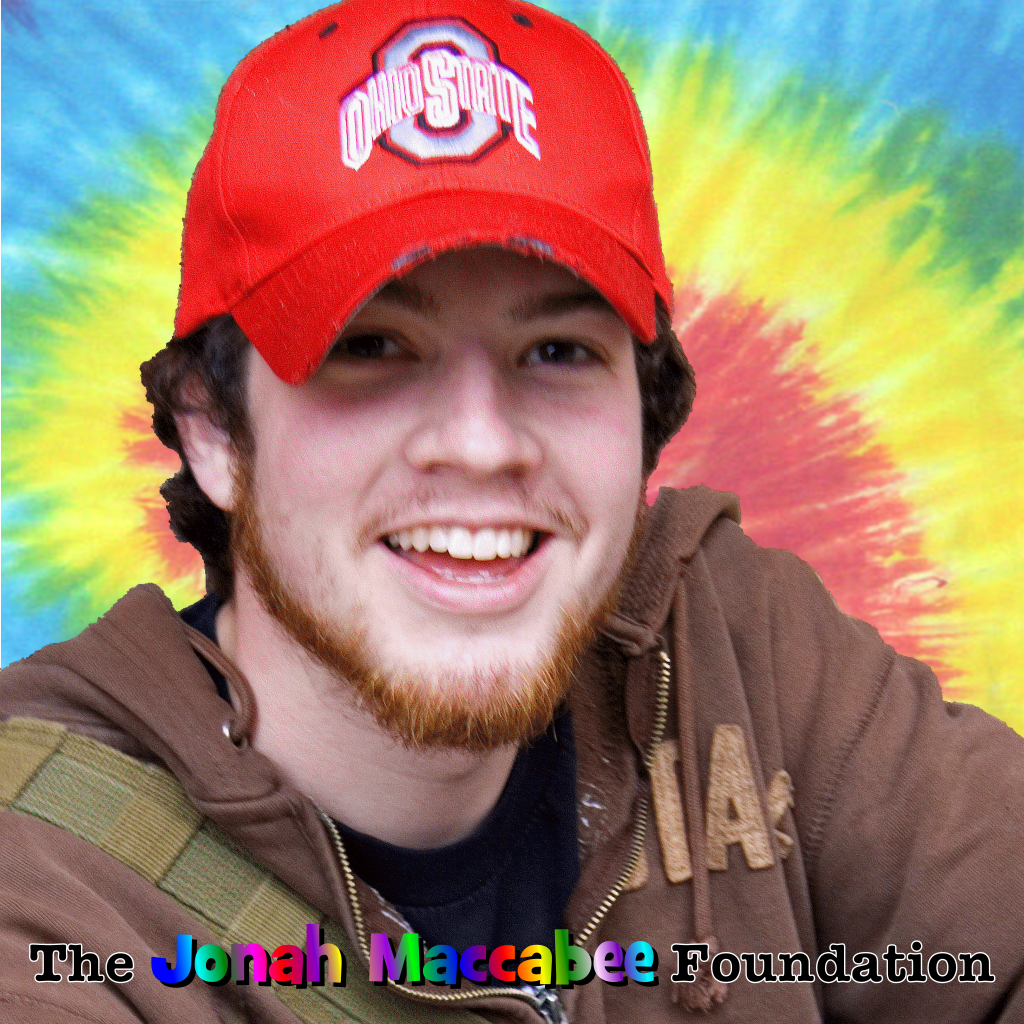 I often find myself wondering where your life might have taken you. What career would you have chosen? Would you have found a partner with whom to share the empire? With a life that ended at age nineteen, you were nowhere near resolving these or many other questions. And while that was fine then, it leaves me pretty much at a loss filling in the details of the life that might have lay ahead.

I was wandering around the internet looking for sermon inspiration when I happened upon the highline. Not the upscale park and shopping district in Manhattan but the one that’s way, way up atop Mount Piana in Italy, a mountain that peaks at 8000 feet. Substantially lower down (but plenty elevated for its purposes) you can find a group of wilderness thrill seekers who, from time to time, camp out on slacklines that have been suspended between two elevations. The slackline that I’m writing about was only 300 feet high but 300 feet is plenty to scare me away. The Statue of Liberty is 300 feet high. Big Ben is 300 feet high. And if you upend a football field, it will extend just beyond that.

On a number of occasions, climbers (they call themselves slackers) have descended upon these Italian alps to hang out in Mount Piana’s neighborhood. This particular communal slackline was about 600 feet long and was tested to support more than fifteen tons. Suspended from the line was a rainbow of 26 brightly-colored hammocks in which the participants slept, ate, read, made music, and anything else they could think to do 300 feet above ground. Pretty crazy, to be sure. And pretty beautiful as well, for a number of reasons. 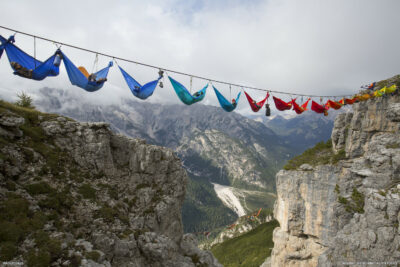 First, look at this photograph. Except for the imminent risk of falling to your death, it’s a spectacular landscape with an astonishing, unimpeded view in all directions.

But there is also a beautiful story behind their choice of location. Mount Piana sits on the border between South Tyrol and Belluno. Across the valley you find Monte Piano, a similarly named but second mountain which, at the turn of the 20th century, resided on the other side of the Austrian-Italian border. During World War I, two armies fought for control of the peaks, sacrificing more that 18,000 soldiers along the way, young people who might better have preferred to be navigating a slackline rather than a flank attack. Four miles of trenches offer testimony to the destruction and death that took place here.

In 2012, Alessandro D’emilia and Armin Holzer were two highlining friends who, if of age during World War I, would have been enemies and might possibly have fought against each other at Mount Piana. Instead, by virtue of their birthdates, they created the Highline Meeting seeking not just to share the spectacular scenery but to pay tribute to the memories of the 18,000 soldiers and to assert their determination to build their own world on a foundation of peace. Their symbol would be a rainbow of hammocks stretched across this same terrain, now occupied by young people from twenty countries all allied in their commitment to diversity, tolerance and love.

On the internet, these words appear again and again. “Winters up here were once characterized by bombs, grenades, and a lot of pain. Our idea was to re-experience Monte Piana friendly and in peace with one another, accompanied by good music during the day, and lulled to sleep by a magical silence.”

One way or another, Jonah, you would have loved this. Good friends. Good music. Adventure. Playfulness, A passion for world peace. And slacklines! 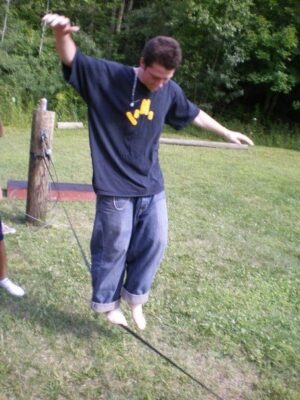 Your own slacklining experience had never gotten you more than a few feet off the ground, but you did love making your way across these things. You first encountered a slackline at Kutz Camp and later, during your freshman year at college, you were excited for winter’s end when your friends could join you in traversing the brand new slackline that Mom and I had sent you for your birthday. After you died, the slackline came back home, a somber testimonial to the countless moments of your life that would never come to be.

You’d had other outdoor adventures, of course. “Connections” during middle school saw you camping in the woods for a few days. You didn’t exactly love it (which might be an understatement) but you never demonized it either. About that same time, with your cousin Douglas you climbed Mt. Bierstadt in Colorado, and reports came back that you weren’t exactly celebrating on the long trek upward to its 14,000-foot peak. But you also got to go whitewater rafting with Mom while you were there and you loved that. A few years later, a photograph came back from Kutz Camp that saw you whitewater rafting again and you looked positively elated.

Which leaves me with a lifetime of wondering. Just what would have become of you, Jonah? You were such a magnificent work in progress. You’d come so very far in your first nineteen years. And while I’ve always maintained that had any of us known these would be your only nineteen years, we couldn’t have asked for a better way to have used them, I don’t think I’ll ever stop wondering what else might have been.

For instance, would you ever have grown serious about learning? That might be the wrong way to frame the question because you never objected going to school. You were easy to awaken on school days and you rarely, if ever, missed a day. But you also refused to do homework, insisting that you shouldn’t have to take responsibility at night for what your teachers should have taught you during the day. Some freshman papers came home after you died, and while they weren’t yet exemplary, they did show signs of both effort and interest. I’ve always suspected that once you found something that truly excited you, you would have begun to invest the necessary energies to do the job right.

During that first year at college, you’d just begun to explore the possibilities for what it could mean to be the adult version of Jonah Maccabee Dreskin. You spent a bit of time fancying yourself a college professor, complete with pipe and tweed jacket, guiding the next generation in either philosophy or astrophysics, or the intersection of the two. Okay, maybe not pipe and tweed. I found a note of yours where you were indeed imagining the whole professor bit but you wrote, “I’m gonna have dreds and a dumbledore beard.” There was a lot of terrain to be covered between imagining and actually getting there, but I had faith that you’d make it happen.

Then I think about how important it was for you to join our temple trip to the Gulf Coast in 2006 where we volunteered to repair homes that had been heavily damaged by Hurricane Katrina. You were so jazzed by the prospect of helping these folks that you willingly left the NFTY Convention in DC a few days early, and I got to watch (from a respectful, get-away-from-me-and-my-friends-Dad distance) as you poured yourself into helping wherever you were needed. Perhaps this was where your future lay, using your hands and your heart to help others piece back together their lives. You’d been hoping to spend Spring Break of your 19th year volunteering with Kesher and other college students in New Orleans. I think the vein of compassion ran strong and deep inside of you. 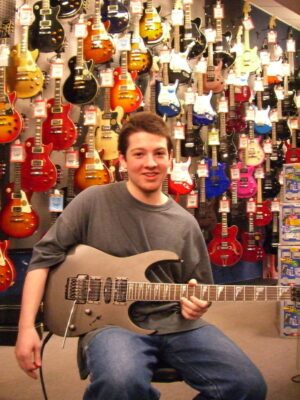 Then there was your music. Look at what you were able to achieve. You’d gotten so good on guitar, perhaps it came easily to you, perhaps because you actually enjoyed practicing. You made it look easy because you rarely spent time at home without a guitar in hand. Whether you were playing a videogame or talking with a friend on the phone or online, you were always working on guitar tunes at the same time. That’s why you got good at it, maybe even really good! And once again, who knows what time would have brought?

You had a lot of growing up to do first, which you’d certainly not completed. Sometimes I thought you were never going to grow up, that you’d be perfectly content taking a minimum-wage job because work was never going to be the reason for you to live. It was going to be about friends, justice, and having a good time. Actually, that sounds pretty grown up to me.

But I’ve really got no clear idea of what the future held for you. Except that you were an exceptionally good guy and that you were going to find others to share that with. Everything else would fall into place. 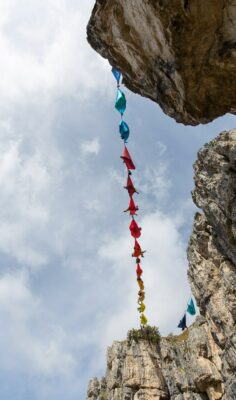 In the Italian Alps, if you gaze upward you might find a bunch of sweet, bright-eyed, idealistic young men and women stretched out in their colorful hammocks across 600 feet of slackline balancing themselves 300 feet above the ground. Someday, Jonah, I may get to Italy and see them. But I don’t have to because whenever I want to see a sweet, bright-eyed, idealistic young person, I just lie back, gaze up at my ceiling and think of you.

You are my rainbow, JoJo. Your spirit is stretched across the sky of my soul. It is my forever challenge to balance life on my own slackline, teetering between the unrelenting sadness of your absence and the ever-heartening memories of your imperishable spirit.

It has been, and is to this day, such a long way down. But then there’s that glorious vista that was, and forever remains … you.