“Nothing on earth is so well-suited to make the sad merry, the merry sad, to give courage to the despairing, to make the proud humble, to lessen envy and hate, as music.”

Contained in these words by Martin Luther (1483-1546) is a pretty fair recipe for anyone who’d like to make their own Jonah Maccabee Dreskin. This was a kid who loved to laugh and loved making others laugh. But he also cared deeply about people. He cared about those whose rights had been trampled, he cared about those who had little food or clothing, and he cared about the lonely and the scared. And, of course, he adored music – making it, listening to it, and sharing it with others.

He probably also loved that these words had been penned by Martin Luther. Jonah had picked them out for a Shabbat service that he’d put together for a NFTY-NAR Winter Kallah in January 2007. That he’d chosen to use the words of a German, Catholic priest and founder of the Protestant Reformation would have brought a sly smile to his face, knowing that some rabbi sitting in that NFTY congregation would be cringing at the presence of Christian references during that moment of Jewish worship. But that was my Jonah. Not a bone in his body would tolerate intolerance, and it would simply never occur to him to close a window and shut out another voice.

Which isn’t to say that he objected to the offensive. After all, his comedic hero was Dane Cook. Need I say more? Thus, the kid who would volunteer his time to help special needs students was also the same brat who loved strumming the song, “Special Fred” by Stephen Lynch.

Jonah meant nothing by it. He just loved to laugh at the world. For him, the song’s joke was no better or worse than the talking muffins gag, possibly his favorite joke of all-time (Two muffins are baking in an oven. One of them yells, “Wow, it’s hot in here!” The other shouts, “Ahh! A talking muffin!”). Given enough time, someone would one day have probably schooled Jonah in the inappropriateness of “Special Fred.” And while this overgrown toddler would never have purposely sought to cause another human being pain, I can’t say with any confidence that the objector would have succeeded in stopping Jonah from singing the song. Did I mention his comedic hero was Dane Cook? 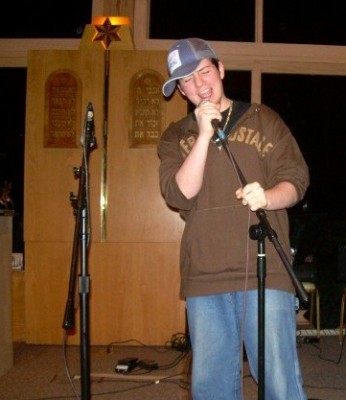 With all of Jonah’s stage experience at Play Group Theatre, his love for hamming things up, and the joy he got from playing guitar, you’d be excused for mistakenly thinking that Jonah would have become a musical performer, taking to the stage of (at least) college coffee houses and talent nights. But that wasn’t Jonah. With all of his energy, humor and musical abilities, he only rarely permitted himself to be in the musical spotlight. I remember him once emcee’ing a talent night at our temple high school. He loved introducing the acts, even telling a few jokes along the way. And he may even have accompanied one or two singers. But taking the musical spotlight for himself? Not a chance. Far more likely, and frequently reported, Jonah would produce his guitar when hanging out with a few good friends, singing offensive songs and offering to teach them whatever he knew.

Which made it interesting how much he enjoyed songleading with little kids. Master songleader and all-around-good-guy Kenny Green has been teaching music in our temple for decades. For a couple of years (2006-2008), we apprenticed Jonah to him. Except for the fact that Jonah would only rarely prepare (see the rest of his life for more on that), Jonah was really comfortable getting up in front of the K-2 crowd and teaching Jeff Klepper’s “Jonah and the Whale,” the Israeli folktune “Achshav,” “Father Abraham Had Seven Sons,” and Sim Glaser’s “Larry Levy” We did somehow manage to impress upon Jonah that there’d be no “Special Fred” in religious school. Kenny told me that “Larry Levy” was one of Jonah’s favorites and that he knew all the words by heart. See above-referenced “Jonah would only rarely prepare” and share jaw-drop that he took the time to memorize it. I’ve been singing this song for 35 years and can’t remember more than a few words at a time (which may tell you something about where Jonah got his work ethic). Ellen once comforted an exasperated Kenny, assuring him he could read Jonah the riot act, even if Jonah was the rabbi’s kid.

Ellen told me that one morning when she was at temple, she spied Jonah in the courtyard with a group of students who were waiting for their teachers to take them to their next activity. Killing time, Jonah led the group in a rousing rendition of “Father Abraham.” Ellen was unable to hear anything through the windows, but she could see how crazy Jonah behaved when he was songleading, and how enthusiastically the kids were responding. Since Ellen couldn’t hear the music, they all looked insane … but she understood every word: Jonah had just made something wonderful happen. [Billy’s note: And it’s quite possible the above photograph was taken at that very same moment.] 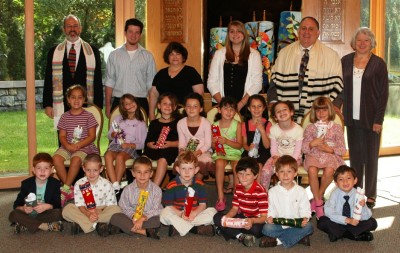 One year, for the first grade Consecration service on Simkhat Torah Morning, Kenny was unable to attend. Jonah came instead, and he led “the song,” which is a poem (from my days at Fairmount Temple in Cleveland) that was originally recited by the Consecrants but which Kenny set to music and the kids now sing each year. Jonah didn’t have to memorize any words, which let him focus on what he always did best … having fun with the little kids. He also got to be in that year’s Consecration class photo, which occupies an honored place in the temple’s photo gallery and in the rabbi’s heart.

One last note about Jonah’s distaste for performing. Each week, Kenny and I lead a brief service for the little kids and their parents. Jonah always resisted joining us, something that I’d have paid him big bucks for … to get him to work alongside me. Kenny was always trying to get Jonah to learn a Mee Khamokha melody for the service, but Jonah always had a new reason for not learning it. Jump ahead to Jonah’s 12th grade temple graduation service. Guess what prayer he got up and led? Yep, Mee Khamokha. Except that he used my guitar which was amplified by a wireless hook-up so that, true to form, we could only hear Jonah’s guitar playing but not his singing. I have a video recording of that moment and want to slap him each time I watch it and see him not standing in front of a microphone. But once again, that’s Jonah. He’d likely get a good laugh knowing that he’d left me a videotape of him performing and all you can hear is the guitar.

The more I ponder this, the more I’m struck by how much the Martin Luther quotation speaks to Jonah’s character: “Nothing on earth is so well-suited to make the sad merry, the merry sad, to give courage to the despairing, to make the proud humble, to lessen envy and hate, as music.”

This kid did more than make music. He made music with every breath, with every heartbeat, and with every smile. While he was at UB, he jotted down the following thought, “Life is a stringed instrument. When our wavelengths meet, we are a chord.”

That’s the kind of music he made.