Our autumn fundraiser has ended, but Jonah’s friends have asked to continue writing about him. So we’ll keep sharing those writings here. Enjoy!

Mason spent his junior and senior years at PGT, where he performed Guys and Dolls, Zanna Don’t, and Hair (with Jonah). He is currently learning Mandarin, Tai Chi, and pursuing an acting career in his new (indefinite) home base in Taipei, Taiwan.

We were all sitting in a circle. It was a passing thing that I saw before Jeff moved on to the next person, a moment of seeing Jonah. It was the first time I had noticed his smile.

We were an hour and a half away from our last performance of Hair at the New Rochelle Public Library, and Jill and Jeff had us on stage for the customary farewell exchange for all the seniors, where they give a little speech to each senior looking back on the years they have spent there. I was curious, as I had only been a part of the PGT gang for two years, what Jeff and Jill had to say about everyone, what the accrual of a relationship like this from childhood all the way up to senior year was going to be like. Definitely mucho tears. The energy hanging in the air just made you want to cry. Like, no yeah dude, you didn’t know? They gonna make you cry today. Cry city. Like yeah, total weep fest. Your brunch serving of Whole-Weep toast (with jam). And I had been there for a relatively short amount of time, but had found a home in PGT. And with the way that PGT makes you immediately feel like family, it wasn’t very hard to enter into this heavy cloud hanging in the room, the cloud of ugh. I gotta leave this place and these people? Noo noooo whyy whyyy, cruel world. And about halfway through their first speech, I hear the sniffles start coming. By the time they got down to my end of the circle, most people were a mess. And I thought to myself, these speeches are a little cruel to be honest, because they’re like, here, let me remind you how wonderful the last ten odd years of your life have been with us, and that no one you meet in your life will ever give you the amount of understanding, love, and support that we will give you. Now go off into the cruel world of adults and get ready to suffer.

And I remember as a means of maintaining my street cred, and not giving in to whatever that knot in my throat was urging me to do, I started looking down at the floor, began studying this weird hardwood gym-class floor that we had been performing on for the past two weeks, studying the clear laminating gel stuff that coats these wooden planks, and those little gelly bumps that would cluster every few centimeters. Really, a strange floor to pretend to be hippies on.

And then they get to Jonah, somewhere towards the end of the circle. He was sitting cross-legged, elbows resting on his knees, hands dangling off the side of his legs, a little bit of the lazy kid lean to the left, weight pushed into his left knee. And Jill started her speech, and I looked at him, and he was smiling. And not a little self-conscious repressed Mason smirk, but a big fat beaming Jonah smile. And my next thought was, what is wrong with you man?? Have you not been abreast of this heart-wrenching and bittersweet situation thus far?? And Jill and Jeff start their speeches for him, and he is still smiling. 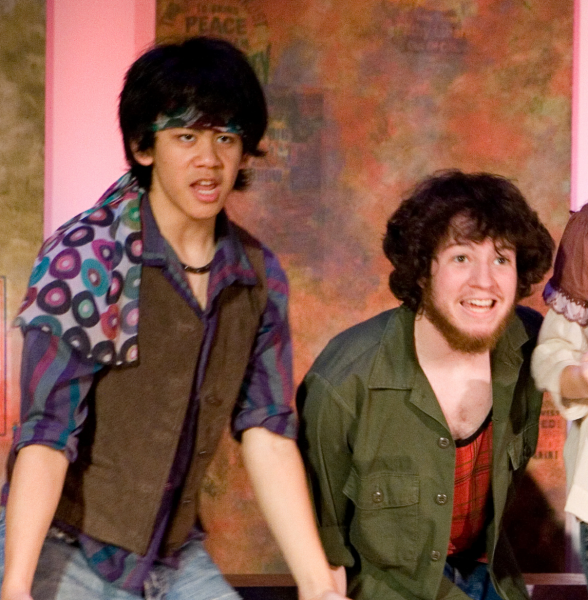 His eyes did not leave Jill and Jeff, but remained in a soft focus. He seemed to exist in some sort of pocket, away from time, in a way that made it seem like the circle didn’t exist, that we weren’t there. The only thing that existed was this direct line between him and the words that were coming out Jill and Jeff’s mouths. The only distinction to be made was that these words appeared to travel towards him, enter through a tiny hole of this space bubble that enclosed him, and proceeded to fill the air inside, so that he need not focus so hard on their mouths, as it was all contained in this pocket.

I don’t know where this smile came from, or what it was about. It seemed vaguely to start somewhere in his brain, traveling down to the corner of his lips and then pushing upwards and outwards. But looking at him and this happiness that was emanating through him, I could not locate a particular place in his body that it was coming from. It just stood, without any sort of time attached to it, as if it had been there forever and we happened to be witnessing presently. His appearance made it seem like someone unseen was leaning in close and whispering some juicy secret into his ear. Or that he was watching his favorite movie, and the best part was happening in front of his eyes. I think if someone were to poke him he wouldn’t have noticed. And if one had somehow managed to shake him out of his reverie, he might look around and think it odd that we were all crying.

I couldn’t help but think it strange that he would be smiling at such a time. Not that one could not feel happiness, or laugh, or smile, as this moment was in fact a celebration, and there was much to be happy about for all of us. And I believe we all were in fact quite happy to be there. But this experience of saying goodbye always, for me, feels characterized by a sense of dread, a feeling of your heart being pried open because of the love you feel for these people; and in this anticipation of leaving what you feel is such a real place, you sit there and you feel so sad. And you want to cry. And you feel a chapter of your life is closing. So when you see in your line of vision this massive SMILE, emanating joy and satisfaction, it feels contradictory, and in fact a bit offensive to this experience that you yourself are having.

And I can only take a guess as to what was behind this smile. In this one show that I did with him, I only had a handful of conversations with him, so any guess is merely just that, guesswork. Perhaps there were a lot of internal happenings that I could not see. But, simply put, maybe this moment between him and this group of people was a celebration, and nothing else. Perhaps he was simply happy to be with two people he loved, sitting in front of him, giving him really nice compliments. Or maybe he was just a really happy kid. Like, way happier than the rest of us.

Did the future, this new phase of entering college, and the prospect of leaving this home behind, not daunt him? There had to be something that he lacked, some sort of sentimentality about the past that the rest of us possessed during this time, and for that reason he felt no need for sadness or tears. In that case, what was his opinion about the other side of this moment with us? The part about having to leave all these people behind. He must have been aware that this was all going to end. That was why we were all crying. So why did he seem, in an almost oblivious way, to not be tapped in to this sadness that was pervading the room? Did this part just not register with him?

Maybe it was this very sadness coming from his peers that was in fact making him happy; to him it was proof that we were good people, that we had hearts and cared for one another. And that alone was enough to make him smile, and think, cool man, I’m with a good crew. Perhaps he was content enough with the abundance that the moment was providing him, and therefore had no space left in his consciousness for any thoughts of tomorrow or yesterday.

So in my sadness, in this dread I had of departing this place, this time in my life, and these people, and in this feeling that I was drowning in the water, I was, in a way, horribly mistaken. Perhaps this Jonah character, who seemed to be floating on this cloud of bliss above all us criers, and, having somehow purged himself of worry and angst and sadness, had found a way to float, and at this height looking down was privy to inhaling all that wonderful fresh air, feasting on all that delicious fruit, the fruit of company, that this joyous occasion had to offer. So what were we doing suffering at the bottom?

P.S. Your donation at jonahmac.org is always welcome! We are ever grateful for your friendship and support.