On May 13, 2012, Jonah would have graduated from the State University of New York’s University at Buffalo. To mark this occasion in a meaningful way, I have invited friends from his freshman year (who knew him as “Mac”) to share memories about him. These young people have opened for me a small window into the life Jonah had begun away from home. I hope this collection of stories opens that window for you. 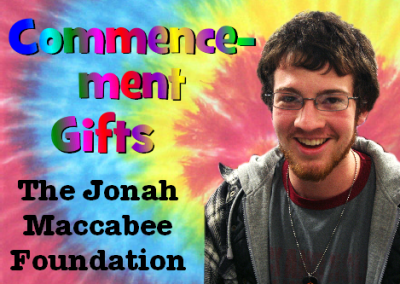 Matt Yaeger was one of Jonah’s three roommates at UB. He majored in Business Administration and graduated in December 2011. This past January, Matt began working for GEICO in their accelerated leadership program.

My roommates (Chris, Matt K and Mac) and I were hardly ever in our room at the same time, let alone all going to bed at the same hour. However, one night I remember us lying in our twin-sized mattresses talking about school, girls, and life in general. We were, for once, insulated from the noisy surroundings of the dorm life and really connected with each other. That kind of night honestly never really happened ever again – usually we’d all come into the room at our own separate times and sleep whenever convenient.

Mac loved to sleep. Freshman year I was, for whatever reason, obsessed with rising early and getting to campus. Maccabee, in stark contrast, cherished his beauty sleep and always insisted on getting ten hours! One day, I remember coming back from a morning class around noon and recall carefully closing the door to the room so as not to wake Mac. As I walked into the main room from the walk-in closet area I remember seeing Mac’s eyes flutter open in a moment of horror as he realized that he was late for his class. For underneath storage purposes, we all had our beds bunked as high as possible, maybe four feet off the ground. As Mac went to hop out of bed, he tripped on his blanket and fell to the floor, where he immediately bounced up and ran to the closet to throw on some clothes and race to class. All in all, this whole encounter probably lasted ten seconds but I remember it as being one of the funniest things I’d seen in a long while.

Prior to college, Jonah never demonstrated a strong commitment to academics. It’s not that he didn’t love to learn; he did. But no teacher could evoke a loyalty to study, and would have to (hopefully, his parents prayed) settle for Jonah’s natural curiosity (which was ample) and his love for debate (which was also ample) to get him through any course. That said, Jonah almost never missed a class during high school. He rarely got sick, and he never complained about going to school (which always amazed me). He wouldn’t get up on his own but once he was out of bed, he moved into each school day without a moment’s resistance.

College, with its lack of parental oversight (ie, wake-up calls) and its abundant assigning of papers, must have been a very different and challenging world for Jonah. As I often do about so much of his life, I now find myself wondering where Jonah’s college years might have taken him. In time, I believe he would have found his passion and immersed himself in learning (and maybe even study!) with everything he had. I’d always pegged him for a future teacher, and he himself once said that he’d be the coolest college professor ever.

In the days after Jonah died, Matt left the following note online, providing additional details of the dorm room dynamic:

As a roommate, Mac was a great person and as a friend even better. I can still see him at his desk late at night playing his guitar, bathed in the light from his lamp. His music, his humor and his personality have affected me in a way that not many others have. The beautiful thing about Mac was that he was never captured by any sort of constraining ideology or paradigm – that was too earthly, too predictable for an individual like him. Whether it be our slight differences over politics or other petty things, Mac always thought out his own ideas and was never afraid to express them. It would never tire me to see him waking up at noon every day; it made me reevaluate myself. He had his own idea on how life should be lived; he didn’t give a damn how that fit or didn’t fit with society.

What amazed me about Jonah’s approach to living was that, even though he thought and acted in a very individualistic and (I daresay) contrary manner, he was never angry or mean about it. He thought the education system left much to be desired and, for his type of personality, he was very likely correct. Our classrooms in America are designed for the kid who can sit still, take notes, and do homework. That leaves out a whole lot of young people who need a different kind of stimulus, a different kind of information input. It can be done but, by and large, American schools have little or no knowledge how.

Jonah was always a mystery to me. The good kind. Like a present, beautifully wrapped and sitting in plain sight for days while you wonder what’s inside. Jonah had so much that was getting unwrapped, so much inner beauty that was steadily emerging from him, steadily gracing all who gathered around him. It had begun in high school and continued in college. One of my greatest sadnesses is losing him before all the wrapping came off. There was something incredibly special in there and I think there was a great deal more to be uncovered.

Rather than stay sad (which I could certainly do), I enjoy ruminating about the possibilities. What might he have become in the years ahead? What profession might he have selected? Where would he have chosen to live? What kind of clothing would he have preferred? Would he have shaved his beard? What role would music have played? And whose lives would have been affected by the way he lived his own?

Matt’s writing just after Jonah’s death concluded with the following:

In a way, Mac’s brief tenure on this planet was fitting – he came and blessed us with his charm and intelligence. Now he is seated in the house of the Lord, cracking jokes amongst the angels.

It’s a great image. Jonah in the Great Beyond, entertaining the heavenly hosts. Of course, I’d rather have him entertaining us, but Matt’s image brings a smile to my face and acknowledgment of likely truth in my heart.

About a month before Jonah died, his roommates, along with some other guys on his floor, shed all but their boxers, donned lampshades (!) and headed down to a girls’ floor for what I imagine was one of the strangest raids in college history. Jonah assumed the role of videographer as this odd troupe scampered through groups of very surprised young women. In the film, I hear Jonah’s distinctive laugh (I always loved that laugh) along with his response to the posse’s question about how they could possibly move with lampshades covering their faces. He said, “You just gotta look once and run straight.”

This, I think, turned out to be far more than a suggestion for their ten minutes of silliness. It was pretty close to how Jonah lived all the minutes of his nineteen years. “Look once and run straight.” He had such a clear idea of what was important to him. And he followed his own lead, forging a path that others were only too happy to join or, barring that, to at least watch in surprised but appreciative wonder. Matt Yaeger noticed the phenomenon that was his roommate, and he was grateful for the opportunity to spend at least a little bit of his life sharing in the wonder that was Jonah Maccabee Dreskin.

P.S. “Commencement Gifts” is The Jonah Maccabee Foundation’s very first fundraiser. Thinking of what might have been Jonah’s graduation on May 13, 2012, we “commence” the work of what I hope will be a worthwhile participant in the not-for-profit community. Please consider making a tax-deductible gift at https://www.jonahmac.org by Sunday, May 13 (okay, or any other time). Thank you.