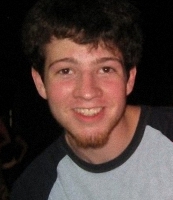 The first time I wrote about parallel lines, I was drawing them between your life and mine (Parallel Lines – Part One). I knew there would need to be a Part Two. Not about you and me, but about you and Charlie. 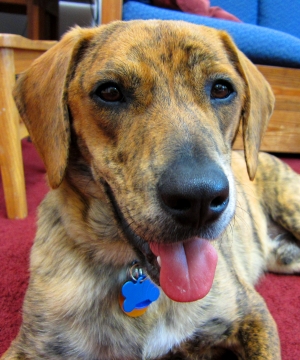 You’d have liked Charlie. He’s our wonder-dog. He came to us about a year after you died. I thought we needed him badly. Our family was hurting a lot, and while we were doing just fine at taking care of each other, I didn’t think we weren’t having very much fun. Charlie changed a lot of that. And there was something right about rescuing a dog when we hadn’t been able to rescue you.

They told us at the shelter (Pets Alive in Elmsford, NY) that Charlie is a beagle/basset hound mix. At the dog park, folks marvel at Charlie’s brindle coat and wonder if he might have a bit of boxer or pit bull in him. I, ignorant of most things dog beyond what food to give him, smile stupidly. When people ask me what he is, I just answer, “Brown.”

Charlie has been, and continues to be, the best therapy for my continuing efforts to live in a world without you. Charlie needs me. I can’t sit around all day feeling sorry for myself when this dog has to eat, pee, and play. But more importantly, he draws me to him. Something in his eyes, in the way he rolls on his back for belly-rubs, and the way he nuzzles into us for scratches behind his ears (Ellen calls these his hugs). Charlie requires love and attention – something people need also, but that I think I’d been having some difficulty with. When Charlie arrived, he and I got more of what I think we all need.

There’s a lot more to Charlie, however, than just being adorable. Much more. And if you were here, Jonah, you might see it too. There are similarities. Intersections, if you will, between his life and yours. Here are five that I’ve identified.

On Shabbat afternoons, you and I had a tradition. Originally, it was a family tradition, that I would stop by the deli on my way home from temple and pick up sandwiches for everyone. Roast beef and turkey on a roll was your favorite. But, a) you and I were the last to stop eating big, bready foods; and, b) the deli went out of business. Before it closed its doors, however, I started bringing home sliced pastrami, and you and I would fry it up for our shared Saturday afternoon lunch. I love remembering that. In those high school years when you had less and less need to spend time with me, we always came together to make that lunch. Nowadays, Katie sometimes does the fried pastrami thing with me, but more often than not, I’m on my own.

Well, not quite. When I’m at the stove frying up my meal, a certain canine is sitting quietly next to me. He patiently awaits his occasional “hand-me-downs.” Typically, I tear off a small piece and serve it to him while I cook. I know that all dogs would do this (I also know it’s not an exclusive bond with me, and that he’d probably take treats from Hitler), but I’m grateful to have Charlie join me in carrying on this culinary tradition. His nose is wetter than yours was, JoJo, but he’s dedicated and disciplined in his participation, and I think you’d be proud to have him standing in for you.

Charlie loves car rides, mostly (I think) because he looks forward to the rolled down windows and the wind rushing in. Even in the wintertime, if no one else is in the car, I bundle up and let the air bellow through. I’ve done a bit of reading on this and while before, I used to think it was the feel of the gusting air that Charlie enjoyed, I now believe it’s the increased volume of smells that he loves. Dogs have 220 million olfactory receptors (versus our mere 5 million). That means sniffing is a whole lot more fun (and important) for dogs. More air means more smells, so even if we’re just out walking, or Charlie’s sitting in the yard, a sudden gust of wind causes him to sit up and seemingly venerate just breathing it all in.

I’m not so sure about your olfactory prowess, Jonah. You did like incense. To this day, the smell in your room is your smell (that’s a good thing, not a bad one). But what you really loved was having air blowing on you. For as many years as I can remember, you had a small, electric fan mounted at the foot of your bed (I think the one that had traveled many summers with you to Eisner Camp). And all night long, it would blow in your direction. Even in winter, you preferred the movement of air while you slept. Come morning, one of the first things you’d do upon waking up was to reach beyond the foot of your bed and shut off that fan. I always got the feeling there was an unvocalized “Thank you for another great, windy night” that went along with flicking that switch. 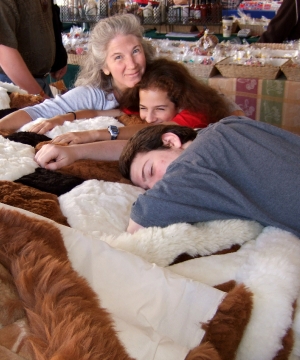 In October 2006, four of us (excluding Katie, who couldn’t get away from her classes at UB) traveled to Charleston, South Carolina. Ellen and I were officiating at your second-cousin Cybele’s wedding. One afternoon during our stay, the four of us ventured into an outdoor market where, among the myriad items being hawked, you spied a display of alpaca rugs. Alpaca rugs are among the softest in the universe, and you immediately fell in love with them, bending down to fully experience the waist-high display and luxuriate (along with Aiden and your mom) in a hundred or so of them. One of those rugs traveled back to New York with us and took up residence on your floor where your feet, and occasionally you, could snuggle up contentedly whenever you wished. 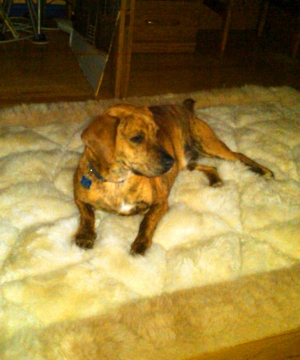 That alpaca rug still occupies its space on your floor. And whenever I go in there, Charlie comes with me. I usually spend some time on your couch reading, while Charlie naps. And where does he choose to settle in? On your alpaca rug, of course. Dogs are comfort experts and Charlie knows a great thing when he feels it. I smile, of course, and remember that image of you leaning over all those alpaca rugs with a most sublime smile on your face. Charlie thanks you for your excellent choice.

Perhaps the most poignant parallel between your two lives is that of your departure and Charlie’s arrival. Not a day goes by when I don’t miss you. Sometimes I’m startled to realize you haven’t been on my mind for hours, but your absence is never overlooked for long. By all rights, Charlie should not be alive either. Somewhere in the state where we bought that alpaca rug is a shelter that euthanizes dogs who stay for more than thirty days. Charlie was among a select few to be flown in a retro-fitted airplane by animal rescuers and brought to the shelter from which we adopted him. I do not make light of the powerful proximity to death that Charlie narrowly escaped … and you did not.

You were only nineteen when you died, Jonah. That’s still a little kid in my book. As kind a man as you had become, you still had a lot of growing up to do. You hadn’t yet expressed interest in challenging work. You seemed to just like showing up and enjoying the ride. You adored your friends and you got a kick out of the world unfolding around you.

Charlie’s life is a simple one. Show up for meals. Show up for walks. Show up for the occasional bath and visit to the vet. Most importantly, show up to have your belly rubbed and to lick hands and faces.

You would have liked Charlie’s life. It’s possible that you’d have considered Charlie your role model. It’s also possible that, for you, living a parallel life would not have sufficed. You might very well have signed on for an exclusive partnership with Charlie, and joined him on that alpaca rug. You, Jonah, would have loved the dog’s life.

Almost a year ago, your Uncle David died. He wasn’t young like you, but his life still ended far too soon. At David’s funeral, I mentioned a lyric comedy entitled L’Oiseau Bleu (The Blue Bird), which had been presented in 1919 at the Met in New York City. Uncle David loved opera as much as you loved Infected Mushroom. The young protagonists set out in search of the fabled Blue Bird of Happiness and, along the way, were told of a Land of Memory where they would see their loved ones who had died. They asked in amazement, “But how can we see them when they are dead?” And they were gently told, “How can they be dead when they live in your memory?”

I know that these parallels are just my heart trying to make sense of a world from which you are missing. But they feel true, Jonah. And they keep you close to me. I love having Charlie in our family. He’s a wonderful salve for the rip that lacerated our hearts on the day you died. And while Charlie’s become fantastically dear to me, I sure do wish you could meet him. I wish you had met him, the day he came to us in June 2010. I wish you’d brought him home with us, and that you’d helped feed and walk and bathe him. Right alongside us. 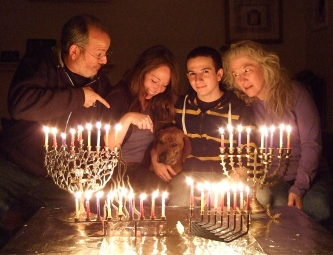 But of course, you didn’t. And even though you and Katie were the ones who first lobbied for a dog maybe ten years earlier, it was the four of us who brought him into our family, and who care for him, and who laugh alongside him, and love him.

I miss you, Jo. I always will. But I’m having a lot more fun now, and Charlie’s often at the center of it. Sometimes it’s Katie who makes us all laugh, and sometimes it’s Aiden and sometimes it’s Mom. And in everyone’s weakest moments, even boring old Dad can get everyone smiling.