I read an article in the New York Times this morning about how a plastic mask used for protests across the world has also created some significant income for its owner, Time Warner (“Masked Protesters Aid Time Warner’s Bottom Line,” New York Times, August 28, 2011). The mask is a haunting one, both because of its design and because it’s hanging on the bedpost in Jonah’s room.

After Jonah died, one of the conduits of information about his life has come from his camera. Jonah took a lot of pictures. Hundreds of them. Usually, I’m able to recognize Jonah’s friends and the places or activities being logged. But one set of photographs from April 2008 (Jonah’s senior year of high school) eluded me. Not a single face was familiar, and I couldn’t understand why this group was hanging around outside the Church of Scientology offices in Manhattan. And why the masks? 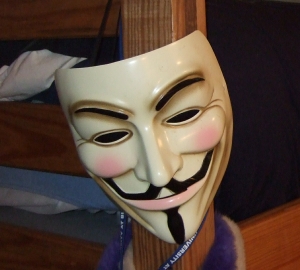 This mask from Jonah’s high school days went to college with him too.

The mask, it turns out, was the giveaway. An organization called Anonymous, founded in 2003, engages in acts of civil disobedience, protesting perceived injustices, and keeping their identities hidden along the way. They have taken very active stands against racism, sexual predators on the internet, AIDS-related bigotry, the Church of Scientology, and even the election of Iran’s President Mahmoud Ahmadinejad.

During Jonah’s senior year, I knew he’d been traveling into New York City from time to time. But Jonah was a gregarious guy and I just figured he was meeting friends there. Anonymous, however, had caught his eye and his heart. I think he loved the clandestine nature of it, and I know he appreciated working to better the world. With his creepy Guy Fawkes mask, he’d found a way to do it in a manner that suited his own quirky but sincere personality.

While Time Warner has enjoyed the profits from sales of the mask, Jonah profited from something much better — the satisfaction that comes from having joined with like-minded people who try to do something good for the world around them. I can’t help but wonder where such activities may have led him, but what remains is my pride in a young man who saw himself as part of a larger world that benefitted from his concerned efforts to improve it.