It’s hard to say when Jonah fell in love with music. I suppose that, for most of us, melody serves as a fairly constant backdrop to our lives. It first consists of the tunes our parents or older brothers and sisters play, but then sometime along the way, we begin to want to make our own selections. I remember when I was maybe ten years old, and my brother Michael bought me a record player for my birthday. It was like he’d given me my first razor (which, actually, he also did) or taken me to my first R-rated movie (my mom did that). It felt like such a grown-up thing for me, to have the capacity to select for myself the music I wanted to listen to. Of course, for a while, I could only choose from what I’d been exposed to, so it was pretty much still my family’s music. But eventually, I began picking out tracks and albums for myself. 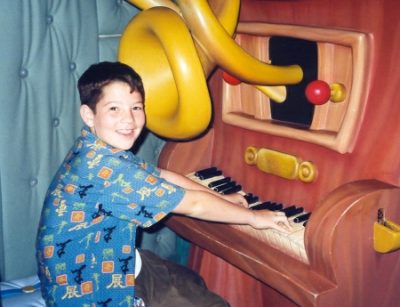 So witnessing my own children’s musical maturing was a sight to behold. After endless listens by all three of the kids to the Animaniacs’ Variety Pack and Mickey Mouse unRAPped, Katie was of course the first to break out of the pack, with Hanson’s Middle of Nowhere. Aiden’s pretty sure his first choice was a collection of alternative rock hits called Buzz Cuts that he had me order for him through the mail. But Jonah’s first is a mystery. It’s the kind of question that pretty much has to be answered by that person, sometime before it becomes ancient history which they themselves have forgotten. And of course, sometime before they’re gone altogether. Not much I can do about that.

Me, my first music purchase was the soundtrack to Mary Poppins. I remember it so well. Grandma Mollie had sent me a five dollar check and after writing her a note in which I promised to spend it wisely, I went out to Walgreen’s with my dad, found the album in a display rack, and brought it right home. There had been no doubt in my mind but that Mary Poppins needed to be the first LP that I would own.

There are other early music memories. Katie told me about when she and Jonah would listen to Footloose in the basement. They’d dance while wearing rollerskates; only, Jonah thought that dancing included throwing things, which of course infuriated Katie. But since when did Jonah ever do things the way others wanted him to?

So I’m left with this mystery. And while I doubt it will ever be solved, I do remember one of the very first CDs to appear without parental intervention was Great White North, a collection of comedy bits by Bob and Doug McKenzie. Figures, doesn’t it? In time, Jonah would come to own as much rock music as the next teen, but there’s poetic synchronicity to his first recording being a comedy. I’d already loaded him up with the favorites of my own youth. Smothers Brothers, Bill Cosby, Tom Lehrer, Allan Sherman and Steve Martin. It probably comes as no surprise to anyone who knew Jonah that these would be at the foundation of the sonic experiences of his youth. Or that I had deftly guided him from very early on in this fine cultural legacy. Such a proud dad!

In time, listening to music would be insufficient for Jonah. He needed to make music for himself. My guess is he admired his songleaders at Eisner Camp and figured if they could be at the center of a crowd because of a guitar, why couldn’t he? So in July 2002, at age 12, he asked me if I would get him a guitar. Typical dad that I am (i.e., cheap), I responded by finding him a $25 guitar on eBay (it was actually a $12 guitar, plus $15 shipping … unbelievable). “Learn how to play that, JoJo, and we’ll talk about getting you something better.” He took me at my word. In a school project just a few months later, a timeline of his life from 0 to 13, Jonah wrote, “Just recently, I learned to play the guitar. It was a big step because pushing down on the strings and moving my fingers so quickly, it hurt my hands. But millions of people on earth and even just in America were able to learn the guitar and I am too. I’m not very good but over time, I’ll practice and become a professional.”

The first song Jonah learned was “The Irish Ballad,” a rather peculiar little folk song written by Tom Lehrer, about a young lass who murders (fairly brutally) everyone in her family. That would, once again, be my Jonah’s sense of humor.

Needless to say, he became pretty darn good. A year later, Jonah got that second guitar (a Martin backpacker). And two years after that, his red Dean acoustic. In time, he’d add an electric guitar, a second electric guitar, an ukulele and, finally, a mandolin. If you want to learn more about Jonah’s guitar interests, read Pick Pocket (June 15, 2009). 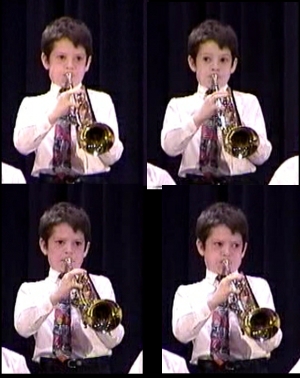 For a while, though, prior to his guitar strumming years, Jonah was known as a horn player. He took a couple of years of trumpet lessons when he was 8 years old. Our good friend Josh Davidson gave Jonah the trumpet from his own youth. They shared a sweet bond through it because the case had Josh’s initials embossed there, which turned out to be Jonah’s as well. Nonetheless, Jonah couldn’t fathom using Josh’s mouthpiece because “it must be covered with millions of disgusting germs.” While I assured him he could use his own mouthpiece until he was sure that Josh’s was safe, Josh wrote Jonah a note reporting that “any cooties have long since died.”

In time, trumpet would give way to shofar. And for a number of years, starting at age 11, Jonah could be found standing between his mom and his dad at the kids’ services on Rosh Hashanah blasting away. More than a few kids were inspired to learn the shofar for themselves because of Jonah. If you want to read more about Jonah’s horn-period, take a look at Sweet Toots (May 24, 2009).

In one of Jonah’s college applications, he wrote, “Guitar … know how to play it, or love someone who does.” When I was young, my brother Tommy was the guitarist in a local high school rock band called the Dauphin Street Blues. A few recordings survived those years (the late-1960s) and eventually found their way to a home-produced CD which I got my hands on. Jonah loved the CD, mostly because it was his Uncle Tommy who played on it. I always found it touching that he loved listening to these particular recordings. I too was always enamored of Tom’s playing, and it warmed my heart to see that his nephew was, as well.

In Jonah’s University at Buffalo application essay, he wrote, “I could never choose a favorite band, or a favorite song, because everyone has something to offer.” I never knew how seriously he took this sentiment until his iPod came home in March 2009. Of the eclectic collection of writers and performers he had gathered, none surprised me quite so much as the pieces by Tchaikovsky that I found there. Where had he encountered Tchaikovsky?

I actually wrote to some of his friends to see if they could shed some light on this question. One of Jonah’s freshman year buddies, Tracy Questel, wrote back, “This isn’t surprising to me that Mac would listen to Tchaikovsky since his music taste was so widespread and grand.” 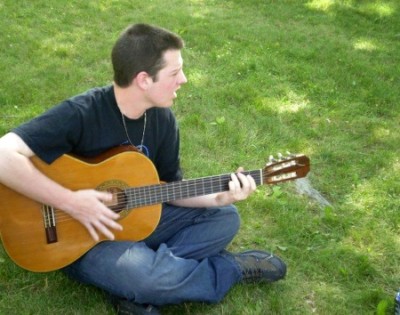 Kutz – the Jerusalem of Music Summer 2007

Apparently I’m not the only one who thought so. Of course, this was reflective of the way Jonah lived his life. No one and no experience was outside the realm of interest or possibility for him. He loved tasting so much of what the world had to offer. I think it’s one of those comforting factoids about him that help me feel like his nineteen years, though brief, were full.

I listened to Jonah’s Tchaikovsky collection. It’s really some spectacularly gorgeous and powerful music. One particular piece — from Act II of Sleeping Beauty, “Pas d’Action, Adagio,” a 6 minute and 1 second recording — moves me so very deeply. While listening to it in the car one day, I was stunned by the “feeling of Jonah” that swept right through me. This music contains so many of the elements of Jonah’s life: his power, his drama, his fullness of spirit, his beauty, his emotion. I couldn’t believe how perfect a musical metaphor it is for him.

So while Tchaikovsky seems like a curious choice for a rocker like Jonah, it’s actually quite perfect for the huge personality he had. Finding it on his iPod was like a parting gift he’d left for us.

During Jonah’s junior year of high school, he put together a Shabbat service for the NFTY-NAR Winter Kallah in which he included the following words of Martin Luther: “Nothing on earth is so well-suited to make the sad merry, the merry sad, to give courage to the despairing, to make the proud humble, to lessen envy and hate, as music.” If ever there was a person who followed his own heart in this world, it was Jonah Maccabee Dreskin. What was so magically wonderful about him, though, was that his heart, as irreverent as it may have seemed, was so attuned to the music of other people’s lives. Jonah wrote at the back of his UB planner: “Life is a stringed instrument. When our wavelengths meet, we are a chord.” I think he really believed that, and he tried each day of sweet, brief life to create a symphony of kindness and love.

One more thought. During the summer following Jonah’s death, we were invited to a presentation in Jonah’s memory, a tribute to Jonah, by the children of Play Group Theatre. In it, they sang for us the old Barry Mann-Cynthia Weil hit, “Make Your Own Kind of Music.” My Jonah, who appreciated the music that so many had to offer, and who mastered any number of instruments which allowed him to offer music of his own, brought a melody into this world that sang itself through Jonah’s every waking hour. Those who were lucky enough to get a ticket to this performance found their lives enriched by the time they spent with the quirky kid with two names. He didn’t always believe his song was one that people would want to hear. But over time, I think he learned there was music in his soul that needed no guitar or ukulele — just a warm smile, a kind word, and a sincere willingness to be a friend.

By the way, as I finish writing this piece, IZ’s recording of “Over the Rainbow” has begun playing on Pandora. Jonah’s signature piece. I miss my boy so much. And I’m so very thankful for the incredible music he’s given us all.