Hanukkah has always been huge in our home. For a number of excellent reasons. First, who doesn’t need a holiday of light and warmth during winter’s dark and cold? December, both in New York and in our earlier home in Cleveland, were really cold and we particularly took to heart the light/warmth aspect of Hanukkah, physically bringing (as you’ll see) lots of it into the world each year. Our celebrations began quite humbly early on. For Katie’s first two Hanukkah celebrations, we still thought observing the annual candlelightings involved only a single menorah. But by Katie’s third Hanukkah, which was Jonah’s first, our hanukkiyot had begun multiplying. We had three of them that year. And gradually, by 2004, we were lighting eight menorahs each night of Hanukkah. It’s pretty much been that way ever since.

Jonah loved Hanukkah. Probably because it was the holiday of the Maccabees. He really liked his middle name and, of course, by his senior year of high school, he was well on his way to becoming known only as Mac. We’d named him Jonah Maccabee because of an enormous dream we’d had for him. We’d wanted him to become (as the Hebrew of his name suggests) “a warrior for peace.” And go figure, was that not exactly the person we all knew and loved? 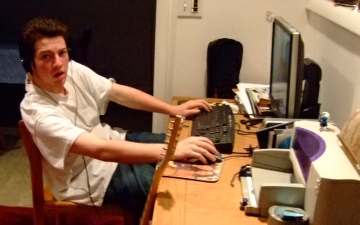 He wasn’t a warrior with weapons.  He never physically hurt anyone (not since he bit Dan Roth in first grade, anyway).  He did have a driving passion for violent videogames, however. City of Heroes, World of Warcraft, Morrowind, Tabula Rasa, Halo, and Oblivion were among his favorite shoot ‘em up (blow ‘em up, vaporize ‘em) adventures. Except that Jonah, as much as he liked playing with virtual explosives, he also liked (believe it or not) the online community that would gather together for play. He would don headphone and mic, and spend hours (and hours!) immersing himself in other worlds that were (yes) violent but places where he would find his favorite pastime … other people. During his year in Buffalo, he found his little brother. After fourteen years of treating Aiden like a bratty little kid, Jonah was able to finally share something decidedly more grown-up. So if anyone tells you that videogames are a waste of time, you tell them it ain’t always so. That electronic connection to a separate virtual world was where Aiden got more time with his brother than any of the rest of us did during those last month’s of Jonah’s life.

But back to the “warrior for peace.” Jonah did have a powerful weapon. His words. He loved words. And he used them well. And while sometimes he certainly employed them to go after someone he was angry at, more often than not he used them to bring humor, companionship and comfort into the world. That was how Jonah Maccabee waged his campaigns … cultivating kindness and peacefulness – boisterous and often outrageous, but no less giving and caring – wherever he went. I suspect that Judah Maccabee, Jonah’s predecessor, would have been proud of his 21st century namesake.

When Jonah was in the 4th grade, he (like every other temple kid who’d had Mr. Solomon as his teacher) needed to complete a special project in order to finish out his year of Jewish studies. Jonah’s project was (need you even guess?) about Judah Maccabee. Jonah wrote Judah’s diary. And in so doing, made it very clear (lest anyone should have harbored any doubt) that Judah Maccabee was Jonah Maccabee’s favorite of all Jewish historical figures. Yep, and that included his dear old (Jonah would say, “very old”) dad. Hanukkah would forever after be a shared celebration between these two Maccabees.

I don’t know if Hanukkah’s flames were part of what attracted Jonah (like a moth?) to the candles, or if that was simply an additional perk to go along with his love for the holiday.  But Jonah did so love flames.  With eight hanukkiyot to be loaded up with tiny Hanukkah candles each night, the Dreskin tradition might have fallen by the wayside had Jonah not willingly volunteered each evening to get things ready. Remember, on the 8th evening of Hanukkah seventy-two candles would have to be carefully and patiently melted into stable positions before the lighting took place. But Jonah always got things ready.

When, each evening, we began lighting those candles, Jonah was certainly always right there. I wouldn’t say he looked pyromaniacal (‘tho I’d not have been surprised if he had). He was actually always quite calm about the whole affair. But he never missed a moment of it. And he always lit as many menorahs as we would collectively deem fair. He’d never sing any of the blessings with us, nor any of the songs that followed. Ellen and I have always led the way on Maoz Tzur and Mee Y’mallel, including harmonies, with Katie and Aiden joining in (Aiden, these days, adding his own harmonies), but never Jonah. It certainly wasn’t that he couldn’t sing. It just wasn’t his thing. Or perhaps better stated, not singing was his thing. And it would happen at the Shabbat dinner table too. He always lit candles, then never uttered a word. From time to time, I’d be watching him and wondering what would become of his non-singing as his own children joined him in these family rituals. Would he be the dad who never sang, or would he ultimately choose to lead the way so that his kids might have a singing role-model for their own participation in Jewish life?

After lighting the candles, we’d open gifts. I always went overboard on these, but I so loved selecting (or trying to select) gifts that each of our kids would love. I remember when Jonah was younger he wasn’t able to hide his feelings of disappointment when he received something he didn’t much care for. But as he grew older, his charm and his grace and his deepening understanding of the important things in life … these kicked in. And I loved watching him give a hug and a thank you for something I knew hadn’t been anywhere near the top of his list. I so admired that in him. Especially knowing how far he’d journeyed to get there.

I’ve written elsewhere (“Fireworks,” July 4, 2009) about Jonah and our “9th Night of Hanukkah” family photographs. These were not always the easiest pictures to shoot. Back before digital cameras, it was largely guesswork as to whether or not we’d actually captured our images in such low light. But the kids were pretty great, and the result was that we’ve now, after 21 years, got a pretty incredible chronologue of everybody’s growth. During these shoots, Jonah didn’t often handle the camera but when he did, he loved to play. If you’ve ever been on the other side of his camera when he’d told you it wasn’t on and then you learned he’d just videotaped you standing still and complaining while he took too long to “set up the picture,” you know what it was like for us. Well, at least for me and Ellen. Katie and Aiden never fell for it, but Ellen and I did every time. I’ve got the videos to prove it. Which you’ll never see. 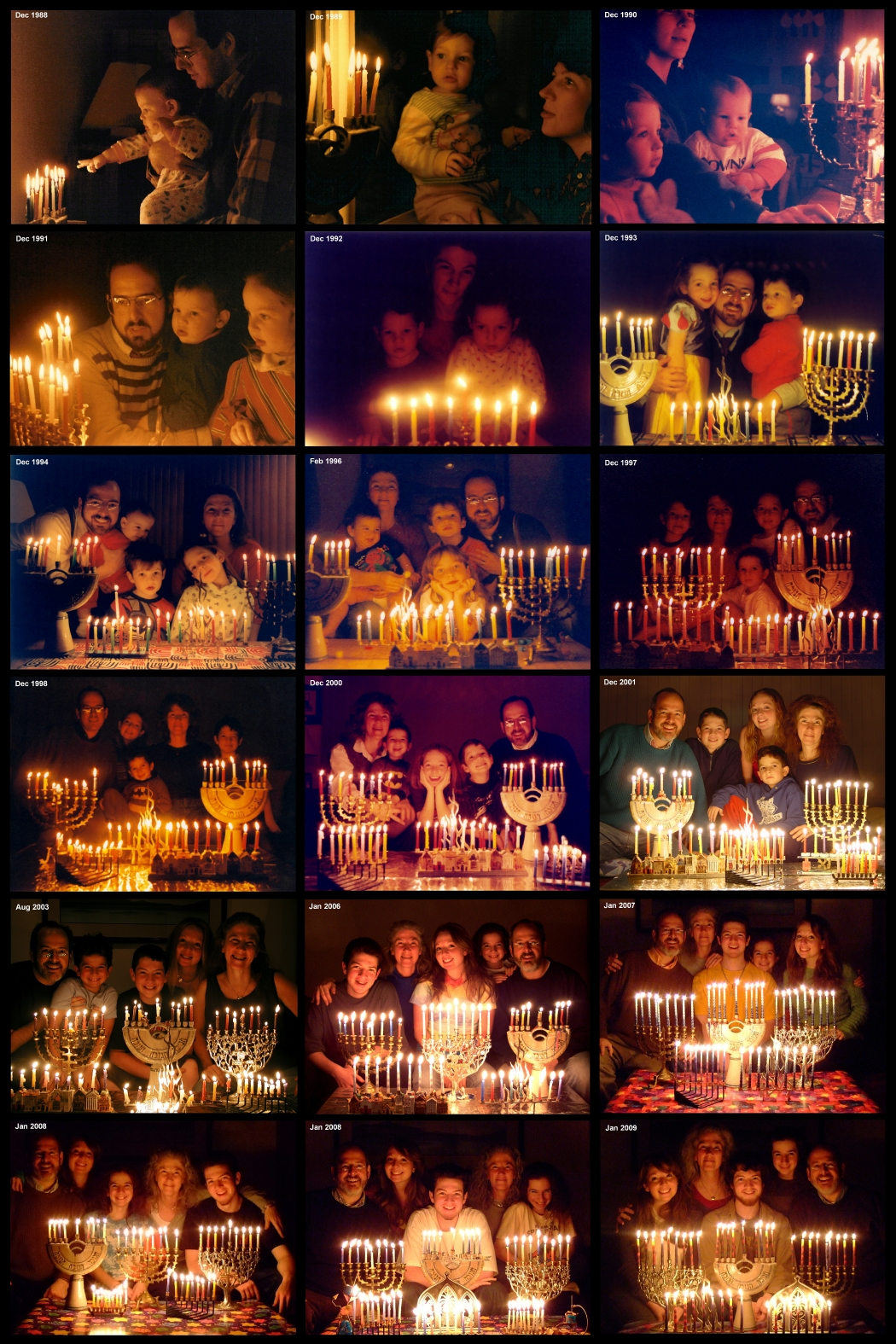 The only other important piece of Hanukkah at the Dreskins that needs mentioning is Tzedakah Night.  Again, I’ve already written elsewhere about it (Hands and Smiles), but no Hanukkah in our house was ever complete without taking one evening to count the year’s Friday night tzedakah collections, roll up the thousands of coins, trade them in for bills at the bank, and go do some good with the money somewhere in our community that evening in place of giving gifts to each other.  It reminded us all how lucky we were to have so much, and also how lucky we were to have hearts that cared enough to want to help others.

Writing about our family is risky business. We have never been the perfect family. We have our share of arguments, and independently busy lives that leave little time to spend with each other. So first and foremost, Hanukkah always brought the five of us together for at least some of each of its eight evenings. Even if we had to wait until late at night when everyone finally got home from work/play rehearsals/life, those candles got lit, the songs got sung, gifts were opened, and what truly were holy moments of love and sharing got created anew year after year after year.

This year was, of course, difficult. We missed Jonah every evening. And as the number of candles grew, one or more of us somewhat reluctantly moved to set them up. Jonah wouldn’t have hesitated. For the lighting itself, our crowded little front window had too much space in front of it this year. The hanukkiyot were just as numerous, and there were more for each of us to light. The singing wasn’t any softer, of course, but we missed Jonah’s voice just the same. And when the gifts were opened, we wished so much that he’d be opening his, as well. But there were no gifts for Jonah this year. I did keep his name on my list, though. And beneath it, I simply wrote, “My love.”

That boy was his own Hanukkah menorah, with a flame that burned so brightly and so warmly and brought such spirit into the world. A spirit, by the way, that I don’t think even death can obliterate. Our memories of him may bring tears, but they also bring a lot of inspiration. The way he lived, the way he grew, and the way he affected those who grew to love him – none of that goes away. So while we wish we had him in our house, and in our arms, we certainly have him in our hearts.