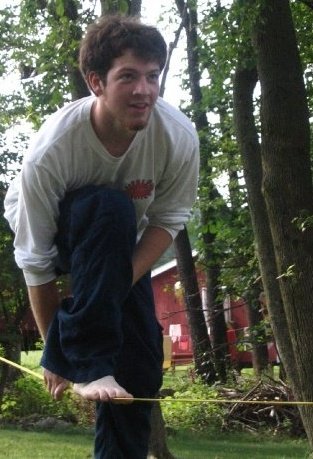 On February 14th, nineteen days before he died, Jonah turned 19. I always thought February 14th was the coolest date for a birthday, and that one day those who would lay claim to Jonah’s heart would adore the opportunity presented them by its intersection with Valentine’s Day. But alas, others will have to tell that story.

On this particular February 14th, careful plans were being orchestrated to prepare for Jonah’s first birthday away from home. While Katie would be at UB with him, and would take Jonah out for a birthday dinner, the rest of us would be in Washington, DC, attending the NFTY Convention. What transpired that day was fun, and a bit more poignant – owing to Jonah’s leaving us – than we’d thought it would be. 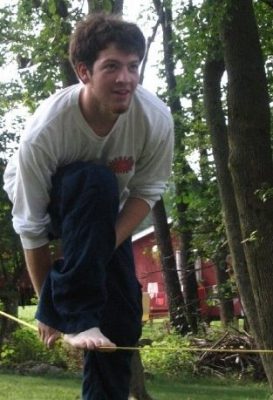 The first gift arrived in his UB mailslot — a slackline. Something Jonah had fallen in love with at Kutz Camp, he was eager for springtime to arrive when he could attach it between two trees on campus and do some close-to-the-ground tightrope walking with his new friends. Late in March, the slackline came back home. It’s now waiting for us to find two trees and willing volunteers to enjoy it on Jonah’s behalf.

The second gift also arrived in his UB mailslot — a copy of “Curious George” in Hebrew. Jonah had loved Curious George from about the age of one when honorary grandparents Fran and Gerry presented the little doll to him. For the next eighteen years, Jonah would go almost nowhere without George. Sleepovers at a friend’s, George was there. Eisner Camp, George was there. Summer road trips, George came along. We bought a second George, just in case the first one ever got lost. Never needed him. This unused George now lives on top of the bookcase in my Study at home, and the very much-loved George lies on Jonah’s bed, like it’s any other day, waiting for his best friend to come be with him.

That’s why the book seemed like such a perfect first-year-of-college gift. Fully illustrated, it was a little piece of home that could join Jonah in Buffalo, even if George himself had decided to stay back in Ardsley. When we went to pack up Jonah’s things, we found the book on his bedstand. Inside the front cover, I’d written words that I so deeply wish could have come true: “Dear JMac, as you embark upon this next segment of your life’s journey, carry within you all that has given you joy. This little monkey has held your hand an awfully long time. In any language, that gives voice to a whole world of goodnesses … those that have been and those that are yet to be. May they all bring you warmth of the spirit.” 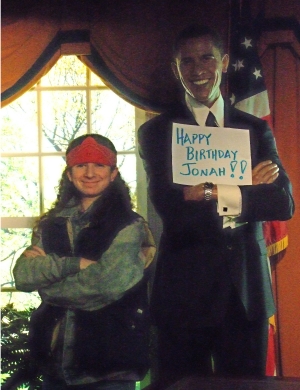 Then things got a bit goofy. On February 14th itself, Ellen and Aiden were visiting the Wax Museum in Washington and made a sign that they placed in the hands of seventeen different celebrities, each one of them wishing Jonah a happy birthday. Later that day when I joined up with them, we began asking real people to hold the birthday sign. Not too many folks complied, but a Park Ranger at the Washington Monument was very happy to do so and only wanted to know if he should have his (really cool) shades on or off. For Jonah? Definitely on. 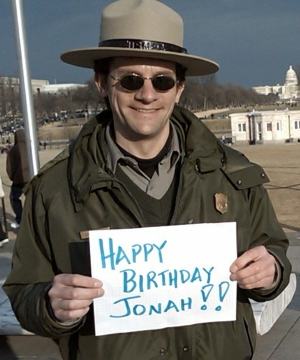 While framing the photograph, I could hear a whole lot of giggling from behind me. When I turned around, I saw a group of 7th grade girls waiting for their turn to enter the monument. I asked their teacher if I could videotape the class holding the sign and singing to Jonah. Amazingly, she said yes.

Sadly, none of our birthday visuals were ever seen by Jonah. At the beginning of March, we were trying to make up a really nice photo book to send him as an additional gift. I guess we ran out of time. 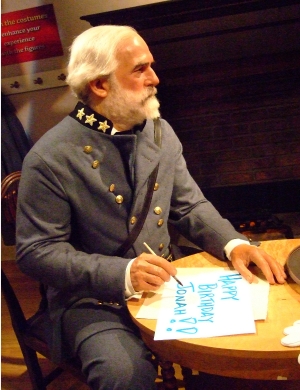 We did manage to unnerve Jonah a bit that day. At the Spy Museum, I asked the guide if he would take a picture with the sign, but he declined citing museum policy that photographers inside the building would be shot on sight. Then he asked to borrow my cellphone and proceeded to call Jonah to personally wish him a happy birthday. That was weird, which we liked. Jonah didn’t pick up, so the guide left Jonah a lengthy message – something about him being from the college administration and that Jonah’s loans had all been revoked and he’d have to come up with a lot of money really fast if he wanted to stay in school and, by the way, happy birthday from the Spy Museum. Later that evening, when Jonah was out to dinner with Katie, Boonie and Jade, he listened to the message and got pretty freaked out about it. But then dessert came.

Jonah had a playful spirit. He loved goofing around. So we tried to give him, from afar, a playful and goofy birthday. It might have worked, except that we experienced far more of it than he did. But I guess this is how it goes from here on out. In the years to come, as my family and I step into the moments that bring smiles to our faces and laughter to our bellies, I hope we will often hear the words, “Jonah would have loved this!”