I don’t really attend concerts. I prefer listening to music at home – to a playlist of my own choosing, at a volume of my choosing as well. When I do get to a concert hall, it’s not usually to hear a rock guitarist. So finding myself at the Izod Center for two hours of Eric Clapton was a bit of a stretch for me. Jonah’s girlfriend Jade and her parents had invited me. I said yes because, first, they’re great people and I like spending time with them. Second, it was Jonah who they’d first asked to join them. After Jonah died, they invited me to use his ticket.

As you can imagine, the evening was an emotional one. But here’s the thing. Jonah would have loved this concert because he loved guitar and he loved Clapton. “Clapton’s the greatest,” he’d tell me. In fact, after Jade’s family had invited him, I was one of Jonah’s first phone calls. He was so excited to be going. I was excited to get a phone call from him. Clapton got Jonah to phone his dad. I love Clapton.

When Jonah was 14, he started taking guitar lessons from local rocker Cliff Mays. He was a good student because, unlike his dad and piano lessons, Jonah actually practiced. Which kind of amazed me … this from the kid who, on moral grounds, had refused to do homework for all of middle school and high school. 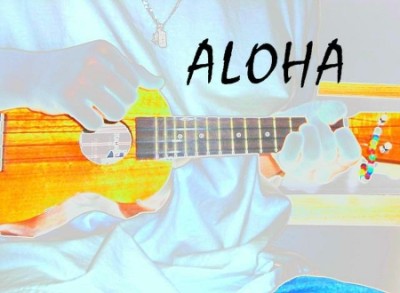 You’ll want to know how this worked though.  Jonah, in case you hadn’t heard, spent a large percentage of his teenage years in front of a computer.  Massive multi-player online games were his thing, alternating between “City of Heroes” and “World of Warcraft” (he and Aiden splitting the cost to finance their shared addiction).  The idea behind these games is that you link up with as many as a dozen other players to join in shared adventures.  As such, Jonah would spend a lot of time waiting for the others to “show up.”  And it was during these waiting times that Jonah would practice guitar.  I always loved the image of Jonah sitting at his computer, electric guitar on his lap, alternating between wielding one axe to master a virtual world and wielding a second axe to master a classic rock riff.

I don’t actually know many of the songs that Jonah could play because his guitar was never ever amplified. Guitar was something Jonah did for himself, and he demanded no (nor did he particularly welcome any) audience. Thus, when in his senior year of high school he’d considered becoming a music major in college, he changed his plans almost immediately upon learning he’d have to audition. There is, however, a video he made during his junior year to audition for the Summer 2007 Maccabi ArtsFest.. I’m told that Josh Nelson is the only person in the entire world who was permitted to view it. In the video, he plays on his acoustic guitar (and sings!) “Blackbird.” He then picks up his electric guitar and plays (amplified no less!) the amazing Tommy Emmanuel version of “Day Tripper” (you can be amazed for yourself at youtube.com/watch?v=mYzajpeAWuA). He then plays “Over the Rainbow” on his ukulele. It’s pronounced “oo-koo-lay-lay,” by the way, and don’t you dare say it wrong because Jonah got his ukulele in Hawaii where they certainly know what it’s called and he tolerated no other pronunciation. 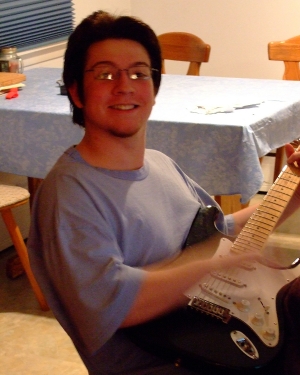 There are a few other notable performances I was permitted to witness.  One was at Kutz Camp during the summer of 2005 when Dan Nichols invited Jonah to play ukulele on “Turn the World Around.”  The impressive thing about that (other than everything) is that the song has five beats (rather than the typical four) to a measure, and Jonah never missed one of them.

One other memorable moment came last June (‘08) when Jonah played his ukulele on stage during a PGT production of “Hair.” He and Aiden performed a duet of “Don’t Put It Down.” The song was about the American flag, but a very proud dad was only thinking of Jonah and his uke.

I asked Aiden if he remembers any songs Jonah used to play. He told me about a piece called “Prancing in the Fields of Magenta” which he isn’t sure but thinks Jonah made up. I googled it and got nothing, which figures because the title sounds all Jonah to me. The song consists pretty much of strum – “wazzup!” – strum – “wazzup!” – strum. Interestingly, Aiden thinks that was the first song Jonah mastered.

As I was getting ready to head out to New Jersey to see Eric Clapton, I slipped two guitar picks into my pocket. One was inscribed with “Toys from the Attic,” the guitar shop where Jonah and I had spent hours playing, and then purchasing, his first two guitars. The other pick Katie had imprinted as a birthday present with “J-MAC.” I did my best to bring Jonah to that concert with me, but I needn’t have tried very hard. For the rest of my life, my sweet, talented son will be with me whenever great music happens.